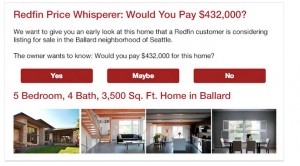 Redfin has bumped into those pesky rules and regulations again. The Seattle online real estate brokerage, which is known for pushing the envelope with new products and services, has removed its week-old Price Whisperer service in Seattle after overstepping rules from the Northwest Multiple Listing Service.

It continues to offer the service in California, Oregon, New York and several other markets.

The Price Whisperer service is designed to help homeowners get a better sense of the price their home might fetch, allowing them to essentially survey 250 buyers on Redfin. Basically, it’s a way for a homeowner to get a temperature of the market before they actually list their property for sale.

In a guest post on real estate news site Inman, Redfin CEO Glenn Kelman alluded to the changes without calling out the Seattle market by name.

“We have already suspended Price Whisperer in one market at the request of an MLS whose rules explicitly forbade it, and apologized for not having taken note of those rules in the first place,” wrote Kelman.

Seattle is no longer listed on the Redfin Price Whisperer Web site, and searches for homes in the Seattle area returned this message: “Sorry, Price Whisperer is not yet available in your area.”

The big issue here is whether Redfin might engage in so-called “pocket listings” in which it attempts to privately represent both the buyer and the seller. But Kelman said that is in no way the intention of the Price Whisperer offering.

“As a relatively small brokerage hoping to persuade owners that Redfin can give their home a fair shake in the market, we’re as opposed to pocket listings as anyone. Pocket listings are anti-competitive, and bad for both buyers and sellers,” he wrote.

We’ve reached out to the company for more details.

The Seattle MLS (NWMLS) has a rule stating that no home may be advertised or promoted before being published on the NWMLS. This is a new rule that was added very recently and unfortunately we didn’t see it before the feature launched. Price Whisperer is a price-testing process with an anonymous homeowner and no property address. The home may or may not ever be listed. If the owner does decides to sell with Redfin, they must list the property on the MLS. That said, we respect and follow all MLS rules, and have honored the request to remove the feature for Seattle.

Redfin has over the years bumped heads with the Northwest Multiple Listing Service, going back to 2007 when it was slapped on the wrist for publishing in-person reviews on the company blog. At that time, Kelman wrote a blog posted titled: “MLS to Redfin: Down Dog, and Kennel!”

In today’s post on Inman, Kelman, who describes Redfin as a one time “rude rebel” in the industry, writes that they’ve grown to cherish their membership in the brokerage community.

“We’ve found ways to be different and still be diplomatic about those differences,” he writes.

But Kelman, as he has done in the past, once again stressed the importance of innovation in the brokerage community, something that he says they are trying to accomplish with Price Whisperer. He notes:

We just have to give ourselves permission to innovate, without giving anyone permission to cheat. The difference between innovating and cheating is crucial. Innovating is when one brokerage finds a better way to serve its clients that everyone else eventually adopts, like electronic signatures or an online map of listings. Cheating is when that brokerage does things to help itself at the expense of its clients, which would be disastrous for the whole market to adopt.

Pocket listings are cheating: They undermine the trust on which the whole market is based, and hurt buyers and sellers. Surveying buyers about the price they’d pay for a home whose valuation is in dispute is, in our opinion, innovating.

It is natural to discuss which innovations are fair every time a new innovation emerges, but hopefully the bias is toward finding a way to make the innovation work in the open market.

Whatever we do, we’ll have to do it together. Long ago, Redfin decided we weren’t just going to treat the MLS as a data source for our website, but as a model for how we work together with other brokers. This means that we can’t succeed unless the MLS succeeds.

We’re all in the same boat. If brokerages can’t keep innovating, every brokerage will go down with the ship, so slowly that we’ll never quite be able to say when exactly we slipped below the surface. The economics of the business will completely change. And we’ll have no one to blame except ourselves. But this isn’t the most likely scenario: Our ship is a beautiful ship, filled with innovative people I have come to respect and admire. We’ll figure out how the Internet can make our market better for consumers, for agents, for brokers. And we’ll keep sailing.