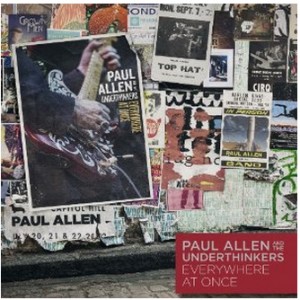 It’s apparently the summer of the tech exec album. Former Groupon CEO Andrew Mason released his dud of a motivational soft rock EP in July. Now, it’s Paul Allen’s turn, and his results are a good deal better than Mason’s.

“Everywhere at Once,” the new album by the Microsoft co-founder and his band The Underthinkers, came out on Tuesday, and it’s a solid sophomore release for the Seattle billionaire.

The liner notes are a veritable who’s who of all-star collaborators, with Ann and Nancy Wilson of Heart, Chrissie Hynde of the Pretenders, Joe Walsh of the Eagles and frequent Clapton collaborator Doyle Bramhall II all contributing their talents to the album.

“Everywhere” is true to its name. Its 13 tracks are a mix of gospel, blues, rock, R&B and funk, but they come together to form a coherent whole, without feeling out of place. The guitar-driven compositions speak to Allen’s well-documented love of Jimi Hendrix, without seeming like an obnoxious love letter.

Here are some of the highlights from my first listen through Allen’s album:

While Allen holds a songwriting credit for all the songs on the album, his guitar work only appears on five of “Everywhere”‘s 13 tracks. That’s not a knock against his guitar playing chops, though. His solos easily hold their own against similar performances by others on the album.

All told, “Everywhere at Once” feels like a solid LP. It’s not particularly adventurous, nor is it particularly offensive – it just feels like a good album put out by a committed group of musicians. It’s certainly helped by the experienced collaborators Allen has brought on board, but the compositions don’t rely on their star power to succeed.

The album is available for purchase through iTunes and Amazon. Proceeds will benefit education programs at the EMP Museum in Seattle Center.