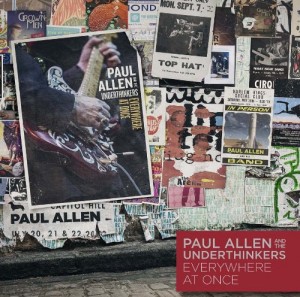 It seems like this is the week for music from founders of tech companies.

Paul Allen, Microsoft’s co-founder, just released a preview track off his new album, “Everywhere at Once,” which is due out in early August.

The new track, “Pictures of a Dream,” is the second cut off the album that he worked on with his band, the Underthinkers. The first, “Divine,” made its way into last year’s “Magic Mike.” However, any publicly-available recordings of it have mysteriously disappeared from the web.

Unlike the album former Groupon CEO Andrew Mason released yesterday, “Pictures” is actually pretty good. Allen brings a rough-and-tumble distorted guitar sound to a mid-tempo song that feels at home in the rest of the Rock ‘n Roll in my iTunes library.

The best comparison I can come up with is that this feels like a fusion of Warren Zevon, “Other Band”-era Bruce Springsteen and modern alt-rock. While that may sound like a hodge-podge, Allen and the Underthinkers make it work.

Is “Pictures of a Dream” going to be the biggest hit in August? Probably not. But it’s good enough that I’ll seriously consider picking the album up when it drops on August 6.

To grab your own MP3, you’ll have to sign up for Allen’s newsletter here.

If you’re interested in pre-ordering a copy of the album, you can do so through Amazon.