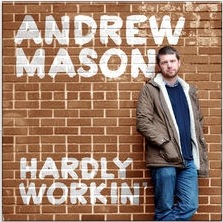 After being ousted from Groupon and writing one of the most candid farewell letters ever, Andrew Mason decided to grow a beard and record an album.

The result is “Hardly Workin‘,” a soft-rock album and workplace manifesto that sounds about as good as that description implies. Lucky for you, I listened to it so you don’t have to. Here are my first impressions:

Overall, “Hardly Workin'” is a cheesy mess. I think the album’s greatest sin, more than any of the goofy lyrics (seriously, who actually uses “shareholder value” in a song?) or its overly self-congratulatory tone, is the poor engineering. Mason may have worked with Steve Albini prior to founding Groupon, but the vocals are often muddy or hidden behind instruments.

Since “Hardly Workin'” is so dominated by lyrically complex songs, the fact that the lyrics are buried half the time hurts whatever feeble attempt at a message Mason is trying to get across. And while the album claims to be insightful, the songs are big on platitudes and short on well-explained advice.

In the end, I think the success of “Hardly Workin'” may be in a different part of the self-help section: weight loss. Its corniness is enough to make me lose my appetite.