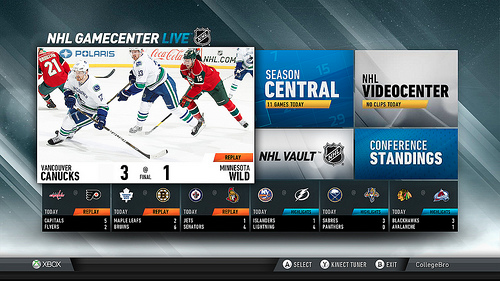 Now that hockey is back after a temporary lockout, Xbox LIVE users can access NHL GameCenter to get all the latest news, replays and live games from around the league.

Today Microsoft announced the arrival of the app, which is available to Gold subscribers only. It’s essentially a hockey hub, with news, standings, statistics, and real-time game scores available.

For an additional subscription fee of $49.99, hockey aficionados can watch live, out-of-market games from the regular season in HD-quality picture. Full replays are also available in case you missed the action.

There are lots of other goodies within the app, including a split-screen feature so you can watch two games at once. You can also watch over 800 classic games with NHL Vault.

If you’re looking to follow your local team, the one downside is the blackout rule. That means if your game is live broadcasted on a local station, you won’t be able to watch through NHL GameCenter.

This is all very similar to NBA GameTime, another Xbox Live app delivering the same content but for hoops instead. And it’s all part of Microsoft’s hope to make the Xbox more than just a video game console and into an entertainment hub.