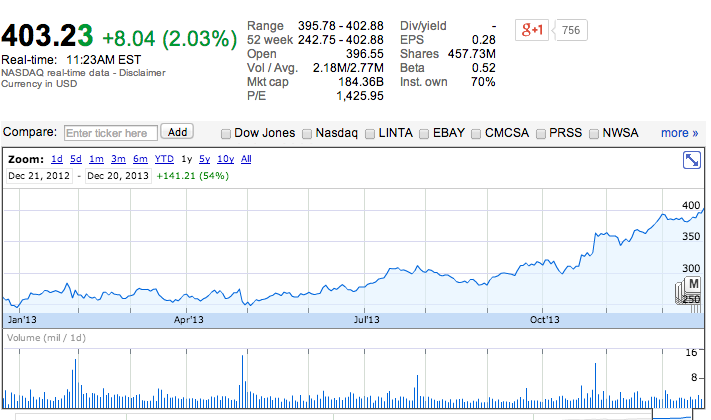 This summer, Amazon.com’s stock hit $300 for the first time.

Now, five months later, it has reached a new milestone: $400.

The stock continues to rise as Amazon fails to turn a profit, investing its large revenues back into fulfillment centers and data centers.

Amazon’s stock growth in the last five years is astounding: nearly 700 percent. Though some worry that the company can eventually make money.

“While Amazon should be admired for its discipline and commitment to the future even at the cost of present profits, investors need to be wary of letting unrealistic expectations take hold,” writes Jeff Reeves, editor of InvestorPlace.com. “Because all it will take is a setback or two and AMZN may tumble from its loft expectations — much in the way other innovators have once investors learn to separate hype from reality.”

Still, though, it appears investors seem content with the long-term bet they are making in the company as Amazon’s share price continues to rise despite profits that range from slim to none. Amazon’s market value is currently $184 billion, compared to Apple’s ($495 billion), Microsoft’s ($307 billion) and Facebook’s ($134 billion).

Per usual, Amazon has a lot going on right now. The company continues — albeit slowly — to expand its grocery delivery service outside of Seattle; it has big plans to expand its headquarters in South Lake Union to accommodate explosive growth (nearly 110,000 employees); and, Amazon’s original TV programming projects are well underway.

And of course, the drones. Earlier this month, CEO Jeff Bezos unveiled on 60 Minutes his company’s plans to create autonomous flying delivery drones that could zip packages through the air directly to customers’ doorsteps in as little as half an hour. 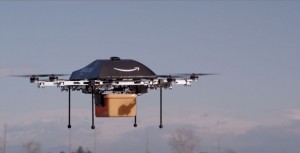 Many call Bezos’ ambitions a PR stunt and competitors don’t seem worried. Regardless, it appears to be another long-term bet by Bezos, who’s always said that his company has to be “willing to be misunderstood for long periods of time” as it continues to innovate.

It’s not all roses for Amazon, though. It is dealing with complaints from warehouse workers, specifically in Germany, who are protesting the company over treatment and pay.