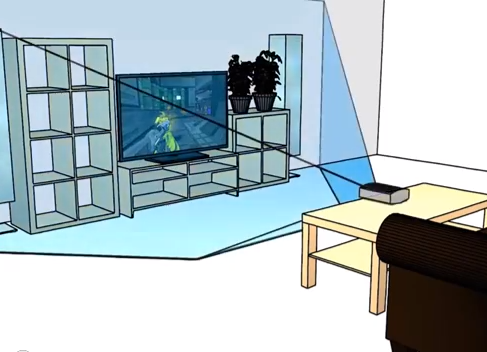 When we first heard about Microsoft’s IllumiRoom project that essentially turned living rooms into a viewing platform, it was pretty exciting to imagine the possibilities.

Now, Microsoft has released more of its IllumiRoom research and it’s shaping up to be pretty bad-ass and potentially change the way we think of how video games — and maybe even other forms of entertainment content — should be displayed.

The Redmond software giant just released a new, five-minute video explaining more about IllumiRoom, a proof-of-concept prototype that uses a projector and Kinect for Windows to extend gameplay beyond the television set to the entire room.

“Our vision for a productized IllumiRoom system is an ultra-wide field of view device that sits on a user’s coffee table and can cover a wide area around a television,” Microsoft says in the video above.

With IllumiRoom, games can suddenly come out of your television screen and take up your living room. That means grenades and other markers can show up outside of the TV and your walls can turn different colors or rattle. For a better idea, watch the video to see IllumiRoom in action. 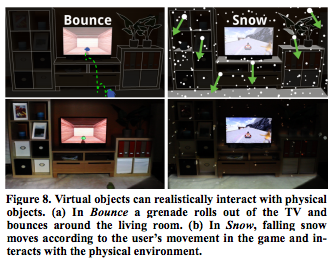 The report also hints at possibilities beyond gaming, which opens up a whole new can of worms:

“Another promising direction is to further explore illusions specifically for video content (e.g. TV shows or full length feature films). Authoring such content is a challenge, but it could enable unique viewing experiences. Can a grenade from the latest Bond film explode in your living room? How would such content be authored? It would be important to investigate how the movie director should deal with the fixed nature of a film and the randomness imbued by the system adapting to the user’s living room.”

One tough hurdle for this technology is making it work for anyone’s living room. Microsoft wrote about this challenge and its plans to make IllumiRoom self-calibrating and adapt for any size of room here.

While this project is still in its early stages, it’s becoming more realistic and certainly pretty special. We may hear a lot more about IllumiRoom when the next Xbox is unveiled next month.