“Some companies talk about a reality distortion field — we’ve actually built one.”

That is how Eric Rudder, Microsoft’s chief technical strategy officer, introduced the Redmond company’s IllumiRoom project at the Consumer Electronics Show this week, in the video above from the Samsung keynote. 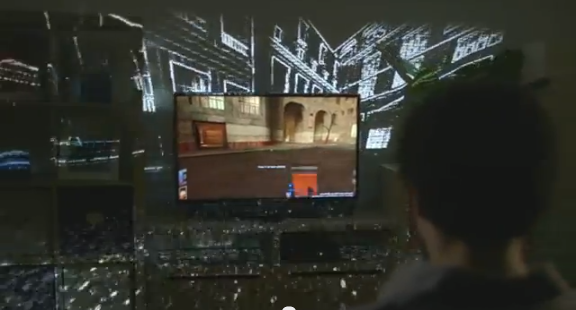 IllumiRoom is a research prototype that uses a projector and Kinect for Windows to extend gameplay beyond the television set to the entire room. Microsoft has been careful to call it a proof of concept, not yet a product, but it’s still one of the coolest things we’ve seen coming out of the big tech show in Las Vegas this week.

We reported on IllumiRoom earlier this week, but in search of more context, I went back this morning and found the video of Rudder’s appearance at the Samsung keynote.

Here’s what Rudder says after the video is shown: “This is just a glimpse of what our future may hold in store for us. We’re excited that this technology can be used in many different ways, to enhance a TV or movie experience, or increase the reality of a flight simulator, or make educational scenarios more exciting.”

Some of Microsoft’s key researchers are working on the IllumiRoom project, including Andy Wilson, Hrvoje Benko and Eyal Ofek. They say they’ll be revealing more about the underlying technology in a paper to be presented at an upcoming technical conference.

But how close is this project to reality? Microsoft isn’t saying, but this is an interesting note from the IllumiRoom project page: “What you see in the videos below has been captured live and is not the result of any special effects added in post production.”

That, combined with Rudder’s none-too-subtle competitive jab at Apple, makes me think IllumiRoom may be coming to our living rooms sooner than Microsoft is letting on.

“Xbox, Go Big” sure feels like a product tag line, doesn’t it?