Even though both Boeing and the Federal Aviation Administration insist the Dreamliner is safe, the government will still be conducing a “comprehensive” review of Boeing’s 787 following last week’s electrical mishaps.

The FAA announced today that it will launch a safety review of the 787’s critical systems, including the “design, manufacture and assembly.” Last Monday, there was a fuel leak problem on a Japan Airlines flight and a fire ignited in the battery pack of an auxiliary power unit of another JAL 787 in Boston.

There were also two new problems announced by All Nippon Airlines on Friday. Cracks appeared in the cockpit of a flight in Japan and another 787 suffered from an oil leak.

“The purpose of the review is to validate the work conducted during the certification process and further ensure that the aircraft meets the FAA’s high level of safety,” FAA’s statement read.

A team of FAA and Boeing engineers and inspectors will conduct the joint review, focusing on the aircraft’s electrical power and distribution system. as well as the interaction between the electrical and mechanical systems. The review will begin in Seattle, but could move elsewhere over the next few months.

“We are confident that the aircraft is safe. But we need to have a complete understanding of what is happening,” FAA Administrator Michael P. Huerta said the press release. “We are conducting the review to further ensure that the aircraft meets our high safety standards.” 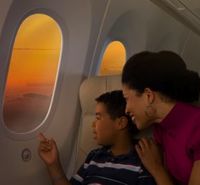 “Boeing is confident in the design and performance of the 787,” the company said in a statement. “It is a safe and efficient airplane that brings tremendous value to our customers and an improved flying experience to their passengers.”

“While the 787’s reliability is on par with the best in class, we have experienced in-service issues in recent months and we are never satisfied while there is room for improvement,” the statement read.

The Dreamliner has logged 50,000 hours of flight, with 150 flights daily. Boeing says that the 787’s “fleet wide dispatch reliability” is well above 90 percent, which is on par with what the Boeing 777 did during its debut.

There is a fleet of 50 787’s flying today, while United Airlines is currently the only U.S. airline operating the aircraft with six jets. If you’ve ever wondered what it’s like to fly one, here’s a neat virtual takeoff and landing from the cockpit of a 787.