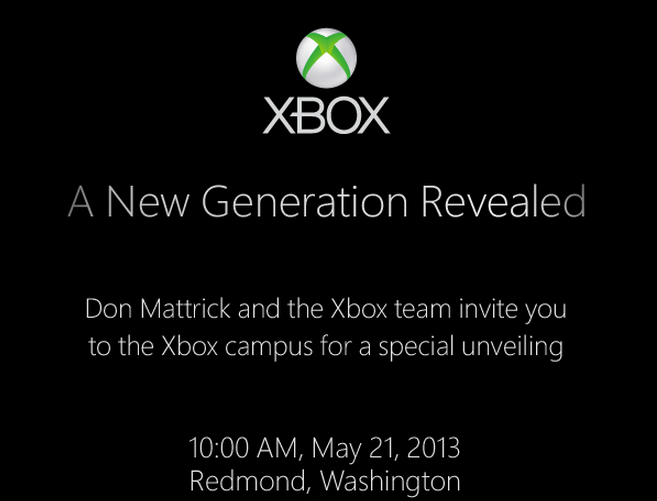 It’s official: We’ll get to see the next generation Xbox next month.

Microsoft just sent out invitations to a “special unveiling” of the new Xbox on May 21 at the Microsoft campus in Redmond.

As Xbox’s Larry Hryb writes, there will be a live global stream of the event on Xbox.com, Xbox LIVE and broadcast on Spike TV for those in the US or Canada.

“On that day, we’ll share our vision for Xbox, and give you a real taste of the future,” Hryb writes. “Then, 19-days later at the Electronic Entertainment Expo (E3) in Los Angeles, we’ll continue the conversation and showcase our full lineup of blockbuster games.”

The May 21 event had been rumored already, so this is no big surprise, especially after Microsoft rival Sony announced its first details of the PlayStation 4 in February.

No official details have been announced, but the new console should bring an upgrade for the company’s Kinect motion-sensor along with a rumored requirement for the Xbox to be connected to the Internet to play games. In general, Microsoft has been expanding the Xbox to become much more of a home-entertainment device, and the next console should continue that trend.

The event comes in advance of the E3 game convention in June. Code-named Durango, the next Xbox was discussed behind closed doors last fall during a patent trial between Microsoft and Google.

GeekWire will be there next month to cover all the action.