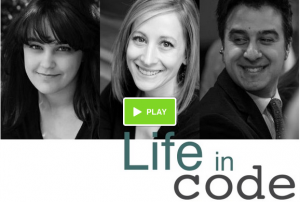 Seattle entrepreneur Paul Watts was tired of just thinking and talking about the lack of women in the tech world, so now, he’s doing something about it.

“I got involved with the LadyCoders group last year, but I’m in the startup world — I wanted to start something, right?” Watts said.

Thus the creation of Life in Code, a web video series telling the stories of women and minorities becoming computer geeks. Watts, the co-founder and CEO at Gatherball who also developed the popular OneBusAway app for Android, has teamed up with Victoria Ramon of Seattle-based video production company Turtle Canyon Media.

The pair just launched a Kickstarter for the project, which plans to run 12 five-minute episodes in its first season with interviews from six different women that have stories to prove that women can succeed in a male-dominated workforce.

The first episode will feature Kate Matsudaira, who is also nominated for our GeekWire Awards Geek of the Year.

“I wanted to focus on some of the personal stories that don’t get told often in our business-first world,” Watts said.

The funding goal is set at $15,000 because Watts and Ramon want high-production value for the videos, which will be licensed as Creative Commons and shareable to “where ever these stories need to be told,” as Watts puts it.

“Much of the funds will go for the equipment and time needed to ensure that quality: light and sound equipment rental, and editing time,” Watts said.

Right now, it’s just Watts and Ramon behind the project, but part of the goal of the Kickstarter is to get more people involved behind Life in Code. They want to build a community of people sharing stories to show how many of them are out there.

This does seem like a big project for someone who’s running his own company, but it’s something Watts cares deeply about.

“One of the things I learned with my involvement with OneBusAway is that you actually can make a big impact in your spare time with a little elbow grease,” he said. “So I do have time, and I can make time because it’s something that important to me.”

While Seattle ranks second in the nation for women entrepreneurs, the gender wage gap in the Emerald City is another story. A new study out earlier this month showed Seattle having the largest wage gap between men and women among the 50 major cities in the country.