While Seattle ranks second in the nation for women entrepreneurs, the gender wage gap in the Emerald City is another story.

A new study is out that shows Seattle having the largest wage gap between men and women among the 50 major cities in the country.

The study, performed by the National Partnership for Women & Families, found that on average, women in Seattle make 73 cents for every dollar earned by males, meaning the average woman here makes $16,346 less than the average man every year.

Washington Senator Patty Murray made a statement today, which marks the annual Equal Pay Day that represents how the average woman needs 464 days to earn what a man makes in just 365 days. 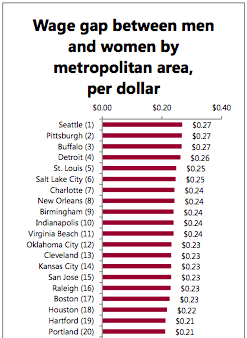 “But today isn’t just about women. And it’s not just about fairness. It’s about the economy,” Murray said in a statement. “And unfortunately, a recent study shows women in the Seattle area have it the hardest, suffering from the largest gender pay gap in the United States, meaning women have less money to put food on the table, stay in their homes, build a nest egg for retirement, and help pay for their children’s education.”

The study claims that women who are employed full time in the Seattle area lose approximately $7,894,987,232 as a group each year due to the wage gap, while about 23 percent of the 141,949 households in Seattle that are headed by women have incomes that fall below the poverty level.

Pittsburgh, Buffalo and Detroit followed Seattle with the largest wage gaps. Boston came in 17th, while Portland was in 20th. Los Angeles, meanwhile, had the smallest gap with just eight cents separating the average wages between men and women.

On average nationally, women earn 77 cents for every dollar earned by men. That’s been helped by the 1963 Equal Pay Act, but at less than a half cent per year.

The study noted that if that wage gap were closed, a full-time working woman could pay for food for 1.7 more years, afford 3,000-plus more gallons of gas and seven months of mortgage and utilities. The study encourages Congress to pass the Paycheck Fairness Act.

The tech and startup industry is certainly dominated by men. However, there are definitely some notable female entrepreneurs in the area: Mary Jesse at Ivy, Liz Pearce at LiquidPlanner, Jane Park at Julep and Christina Lomasney at Modumetal, just to name a few.