Technology was the central topic, naturally, as we recorded the GeekWire radio show for the first time in front of an audience this week, at the HUB Seattle in Pioneer Square. But two unexpected themes also emerged from our guests — teamwork and trust.

Our first guest, startup vet Mike McSherry, talked about the importance of trust when recounting his early days working with tech pioneer Cliff Kushler on Swype, the mobile input company based on technology for entering text by connecting letters on the screen without lifting a finger.

Swype is a Seattle success story, ultimately selling for $100 million to Nuance Communications (where McSherry is now a vice president). McSherry initially worked on the startup without a formal contract, knowing he would be treated fairly.

“I worked for six months, zero pay, on a handshake with Cliff. He exudes so much trust and purity,” McSherry said. “I trusted him, all-in. You need that in a business partner and a co-founder.” 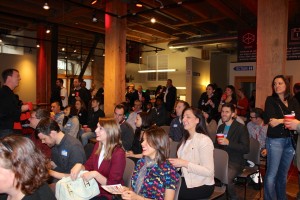 Other highlights from the conversation with McSherry included a behind-the-scenes story about Swype’s discussions with Scott Forstall, then Apple’s senior vice president in charge of iOS, about making the Swype technology work on the iPhone. It was a classic startup dilemma — which platform should they bet on? Ultimately Swype signed a deal with Samsung to put Swype on Android. Apple responded to the news by making it clear they were no longer interested in talking with Swype. “Good luck to you,” McSherry recalls them saying.

Did Swype make the right choice?  “Yes. Android has proliferated,” McSherry said, estimating that Swype has been installed on about 500 million devices to date. “Unbelievable,” he said, as the crowd cheered.

McSherry, who recently launched a voice-powered mobile advertising platform for Nuance (think Siri for ads), also answers our questions about the changing landscape for wireless carriers, and the future of gestures and voice commands as methods of interacting with our devices.

The conversation with McSherry begins at the 12-minute mark in the audio player above.

Next up was our App of the Week, Yabbly, a social network for making better buying decisions by tapping into the experience of a thoughtful online community. It’s a free app for iOS and the web. Tom Leung, the company’s founder and CEO, describes how the app works, explains how it compares to other consumer review and decision apps, and talks about how the startup will make money. (More to come in our separate App of the Week post.)

But one of the most insightful moments came at the end, when we asked Leung, who has two young kids, how he balances home life and a startup as a “founder dad,” a topic he addressed in a guest post on GeekWire last year.

“First you have to marry the right person,” he said, introducing his wife, Wendy, in the audience. “You have to have a really supportive spouse, who understands, and you have to have a conversation with them before you start, to say, ‘Hey, this is what it’s going look like. It’s going to affect our life and it’s going to potentially not pan out. We just have to prepare for that.”

Boundaries are critical, he said. From 5 p.m. to 8 p.m. every day, he’s not online — he’s with his wife and kids. Regular date nights are important, he said.

It’s also critical not to waste time. Leung recalled working on a startup in 1999, when he and his colleagues would work from 9 a.m. to 2 a.m. seven days a week. “To be honest with you, we were just putzing around half of the time, playing foosball … and making a lot of bad decisions,” he said. “Now, if you have focused time and you make smart decisions, you can actually be really successful, and so far it’s been good for us.”

The conversation with Leung starts at 24:30 in the audio player above.

And finally, it’s our Name that Tech Tune challenge, with a chance to win prizes from our meetup sponsors, Double Down Interactive, Postmates and Outlook.com.

This segment features Dan Crowdus, better known as Nintendo mix master The Icarus Kid, who is expanding beyond his solo act with the formation of a larger group, The Icarus Kids. A software engineer by day, Crowdus talked about his passion for Nintendo remixes, and how he got into this whole business of remixes in the first place.

“I’ve been playing in bands and writing in bands for many years, and then I discovered electronic music. The ability to actually use a computer as your instrument really appealed to me, because that’s what I felt most at home with,” he said.

“But what really got me into music in the first place, when I was about 10 years old or so, was the NES soundtrack of Final Fantasy I. That activated this music deep in my soul. ‘Oh, this is what I like.’ That kind of started everything else. So I’m kind of coming back to my roots with this.”

Crowdus talks about how he got started, recording music and sounds from Nintendo Entertainment System games via the audio-out port, building a big library of sounds and mixing in synthesizers and virtual instruments to make an album. He also explains the technical side of his live performances, and his use of the Ableton Live software.

It’s “very versatile software, especially if you’re a software developer, because it controls all of the music and all of the lights, and I can control it with all of these other foot pedals and all of these controllers, and it kind of acts together, like it’s this big mainframe that controls everything,” he said.

Then came the real stumper, when we asked Crowdus to name his all-time favorite video game song. Crowdus was so daunted by the question that he turned his back from the mic to give it the appropriate degree of thought. As John joked, this is where we get into the truly hard-hitting journalistic questions. Crowdus settled on Cloud’s Theme from Final Fantasy 7.

We finished up with an unreleased track from the Icarus Kids — a song that mashes up music from Metroid and Kid Icarus.

The conversation with Crowdus starts at 34:50 in the audio player above. 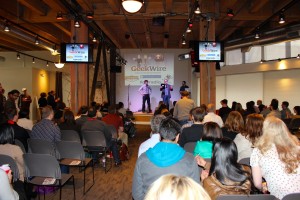 The show begins with our weekly news roundup, the Week in Geek. Stories this week include the growing trend of large tech companies from other parts of the country engineering outposts in the Seattle region — most recently GoDaddy.com, which is setting up shop on the Eastside.

We also talk about Oregon’s rise as a center of technology investment, overtaking Washington state in venture capital investing last quarter for the first time in two decades. Then there’s Microsoft’s rough week, with analysts downgrading the company’s stock and PC shipments falling after the release of Windows 8.

And our final news item is our crowning of Nikola Tesla as the Greatest Geek Ever in our “Geek Madness” tournament.

Thanks to everyone who joined us for this special event. John and I have been recording our radio show and podcast almost every Friday afternoon for nearly three years now in a cozy KIRO Radio studio (along with Erynn Rose of KIRO, who engineers the show and joined us on stage at the HUB Seattle this week).

It was a thrill for us to get out of the studio and hear the feedback from the live audience. One of my favorite moments was when John saw a message from one of the attendees wondering about piracy and copyright issues for video game remixes, and we were able to ask Dan about that topic before we closed the segment. 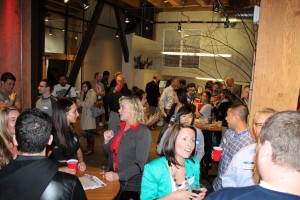 The event went off without any major issues (apart from me losing my voice and an inevitable demo glitch that didn’t make it into the final version of the show.) That’s a real testament to the prep work of Erynn and the HUB Seattle staff, including Kimo Jordan and Sarah Studer.

For anyone curious about how we did this from a technical standpoint, Erynn used an iPad preloaded with our intro and closing music clips that connected to the HUB’s PA system. We then recorded the show from the sound board. We also had a video camera on a tripod recording the show, connected via wire to the sound system, and we planned to use that audio as a backup if anything went wrong with the primary recording.

A big thanks to our sponsors for the meetup, Double Down Interactive, Postmates and Outlook.com, for making the event possible. Thanks also to the GeekWire team (Sarah Camp, Emily Shahan, Jonathan Sposato and Taylor Soper) in addition to our volunteers Alex Tsway and Isaac Alexander for helping us set up and prepare.

Finally, another of my favorite moments of the night was when Jan Drago, the former Seattle City Councilmember, came up to me after the show and asked, “What is this, exactly?”

A longtime Pioneer Square resident, she had been at the HUB for another meeting upstairs, walked into the show and decided to stick around. It was fun to explain GeekWire to her — not just the radio show, of course, but the site — including our roots in the community as former Seattle P-I reporters. It illustrated one benefit of having these types of gatherings and venues, to bring all sorts of different people together.

Next week it’s back to the studio. We haven’t decided if we’ll do this again, but we’d love to hear your feedback on whether we should, and what we can do better if we do.

Listen to the show above or via this MP3 file. Also see this post for more pictures.