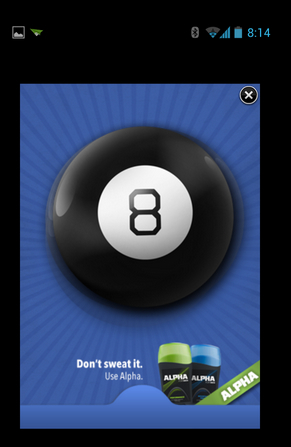 Publishers are struggling to make money on mobile, a challenging scenario given that more folks are now consuming news and information on tablets and smartphones. But a new ad unit from Nuance, a leading speech recognition company, could change the way you interact with ads on your device.

Appropriately dubbed Nuance Voice Ads, the new ad unit essentially allows for a two-way conversation between the consumer and the brand advertiser. You can think of it like Siri for advertising.

“Any brand now could have the tools to have that same level of communications about its products,” said Mike McSherry, the former Swype CEO who is helping to lead the charge on the new product for Nuance.

Appearing as a small banner advertisement, the ad comes to life when the user clicks on it, allowing a person to ask questions and get answers.

In a demo of a Magic 8 Ball ad for a fictional deodorant company, McSherry asked the ad whether he should buy a car. The narrator responded by asking whether he liked it, and then provided some funny commentary on why the purchase would be the right choice. (See video below).

Mobile advertising is growing fast, with eMarketer estimating that the category doubled last year to $8.1 billion. The Nuance Voice Ads will be available only on mobile to start, beginning with iOS, Android and Windows Phone devices. The new ad unit will only be shown in third-party applications at the outset.

But McSherry said there’s big potential to expand in other directions too.

“If you ever assumed that you’d respond to an ad in a car, it is going to be done via voice. We’ve also signed deals with the top three TV manufacturers,” he said.

To get this going in the interim, Nuance has partnered with advertising agencies Digitas, OMD and Leo Burnett. Advertising networks such as Millennial, JumpTap and Ad Marvel also are on board, providing the ability to distribute the ads to as many as 100,000 mobile applications. “We are bringing together pretty broad industry support for this,” said McSherry, who is based in Seattle and worked with a team in the company’s Pioneer Square offices on the new offering.

McSherry noted that the interactive ads could be used for multiple purposes.

For example, he said ESPN could advertise what times certain sporting events started or provide real-time scores. Amazon.com could advertise last-minute Father’s Day gifts, taking consumers directly to a list of ideas on the site.

“This banner ad can all of a sudden open up this incredible world of opportunity of Q&A related to that product or information,” he said. “We are giving a new creative palette to ad designers to add interactivity to mobile.”

Here’s McSherry showing off the new ad unit for a hypothetical advertiser, Alpha deodorant, that they created.