How did a couple of veteran software guys get immersed in the world of hardware? And what’s the deal with this cool 3D contraption that they’ve come up with for the iPhone?

This week on the GeekWire radio show, we get the behind-the-scenes story of Poppy, the 3D camera and image viewer for iPhone, created by UrbanSpoon co-founder Ethan Lowry and software veteran Joe Heitzeberg. Their Kickstarter project has already blown past its original $40,000 goal, raising more than $144,000 so far.

The device — which we’ve called a View-Master 2.0 — holds an iPhone in a slot and uses special optics to let you capture video and stills in 3D format on the smartphone. You can then use the Poppy to view 3D videos shot by yourself or others.

We got to try the Poppy prototype in the studio, and we can attest that it works very well. It’s a real kick to see the world around you in 3D through the device. “We get a lot of attention when we have it around,” said Heitzeberg. “If people see us slip an iPhone into it, they’re like, ‘Wait a minute — what are you doing?”

That’s just one of the differences between hardware and software engineering. 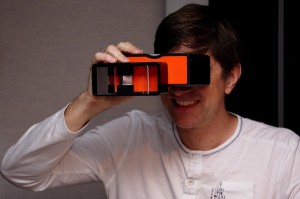 He explained, “In my 15 years in software, not once did anyone ever come up to me at a cafe with computer code on the screen and say, ‘Hey, wow, you’re working on code — are you building some website or game?’ Software is magical. You feel that when you’re creating something, but no one comes up to your screen to ask you what your code is.”

In contrast, with Poppy, they’re approached all the time by people wondering what it is. Which is how they ended up getting none other than David Crosby to try out their product on video for their Kickstarter campaign — a story Heitzeberg tells on the show.

“I think 3D is cool. It is how you experience the world,” he said. “And our thesis was, if you can distill it down to something simple, iPhone-like, and consume, share and capture instantly, and make it inexpensive enough, then maybe it’s something a lot of people can enjoy. A lot more accessible than anything that’s come before it.”

That conversation begins in the second segment, starting at the 8:10 mark in the audio player above.

The show begins with our weekly news roundup. Topics include Microsoft’s big reorganization, the unveiling of the Nokia Lumia 1020, and the new T-Mobile “Jump” subscription-based device upgrade plan.

App of the Week: BestParking is a key tool for urban parkers

Listen to the show above or directly via this MP3 file.