Microsoft will reorganize into four engineering groups, centralize its core business functions, reshuffle its executives, rearrange its product teams, discard the concept of divisional “presidents” and part ways with at least one more longtime leader through a major overhaul designed to unify the company and make it more nimble in the face of massive industry changes and rising competitive threats. 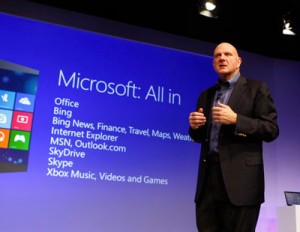 This is Microsoft CEO Steve Ballmer’s attempt to remake the company. It was announced this morning after weeks of rumors and anonymous leaks — many of which turned out to be on the mark.

Ballmer outlined the plan in a companywide memo, distributed this morning with the title, “One Microsoft.”

He writes, in part, “We are rallying behind a single strategy as one company — not a collection of divisional strategies. Although we will deliver multiple devices and services to execute and monetize the strategy, the single core strategy will drive us to set shared goals for everything we do. We will see our product line holistically, not as a set of islands.”

Succeed or fail, the sweeping reorg represents a major change in approach for the 38-year-old technology company, promising to set the tone for the rest of Ballmer’s tenure as the company’s leader.  Microsoft is trying to reposition itself as a “devices and services” company, not just a software business. The changes come as the PC market, which fueled Microsoft’s business for more than three decades, continues to struggle.

The biggest change is the move away from the longtime divisional structure. Under the plan, Microsoft will shift business functions such as finance, marketing and business development out of the divisions and into their own companywide groups with overarching leaders.

Like the leaders of those business groups, the executives in charge of the four engineering groups will be known as “executive vice presidents” — not presidents — to drive home the fact that they oversee specific functions and not end-to-end businesses inside the company.

Here are the four new engineering leaders and their respective groups, as outlined by Ballmer this morning.

Kurt DelBene, president of the Microsoft Office Division, will be retiring from the company as part of the changes.

Tami Reller, currently the Windows finance and marketing chief, will oversee marketing across the company. Mark Penn, the longtime political strategist who joined the company last year, will take on an expanded role overseeing advertising strategy. Both Reller and Penn will report to Ballmer.

Tony Bates, formerly president of the Skype Division, will oversee business development and evangelism, including the current Developer and Platform Evangelism Group and corporate strategy. Bates is based in Silicon Valley, and the move appears designed in part to leverage that position to boost the company’s standing with developers and startups there.

Craig Mundie, who had already announced plans to retire next year, will step down from the company’s senior leadership team in the meantime “to devote 100% of his time to a special project for me through the end of this calendar year,” says Ballmer. After that, Mundie will be a consultant to the company through the end of 2014.

The Microsoft Dynamics business applications group will remain as is, led by Kirill Tatarinov reporting to Ballmer, with some oversight by Reller and Lu. This might make it appear that Microsoft is preparing to spin off the Dynamics business, but a person inside the company with knowledge of the situation says that isn’t the case.

Don Mattrick, who oversaw the Xbox as president of Microsoft’s Interactive Entertainment Business, announced his departure last week to become CEO of Zynga.

No job cuts are expected as part of the changes, at least not in the short run. Microsoft didn’t outline any immediate plans to change its financial reporting structure, which was built around the previous divisions, but that change still appears to be in the works for the long run.