Avvo today is unveiling a new matchmaking service to make it easier for clients to choose attorneys. Dubbed the Avvo Legal Marketplace, the service allows individuals to research attorneys and then choose the most appropriate lawyer for their case.

The launch of the service is a natural extension for Avvo, which already operated a rating system for attorneys and a Q&A service where consumers could get legal questions answered.

But the marketplace goes a step further, allowing clients to privately lay out their case and then receive bids from competing lawyers.

The concept is similar to Zillow’s mortgage marketplace, which operates much the same way, just for consumers seeking a new mortgage. (Avvo and Zillow have a common lineage in Rich Barton, the Zillow co-founder who is an early investor in Avvo).

While services such as LegalMatch and Total Attorneys also try to connect clients with lawyers, Avvo spokeswoman Kari Day says the new service is the “first marketplace of its kind.” 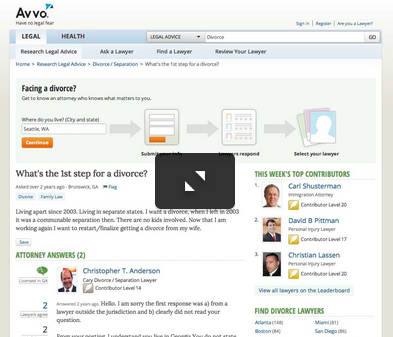 “What makes it different and unique is that consumers can post their legal issue and get multiple responses from attorneys, with information about pricing, approach and background,” said Day. “We’re not picking the attorneys that get served up to the consumers. Any attorneys can participate. And the consumer stays in control, able to contact any of the attorneys they like or exit the process – without being bombarded with follow-up calls.”

Avvo, which recently expanded to new 25,000-square foot offices at Union Station, is starting the new marketplace in two practice areas: divorce and traffic tickets. It plans to expand into other areas later this year.

Avvo CEO Mark Britton, the former general counsel at Expedia, said that the process of finding an attorney is cumbersome.

“Consumers need a variety of information to confidently choose the right attorney — including a better understanding of how the attorney will approach the case and anticipated costs — in addition to the attorney’s experience and reviews,” said Britton.

When a consumer privately submits his or her information to the marketplace, attorneys can respond with their insights on how they’d approach the case; estimated length of the case and estimated cost.

Founded in 2007, Avvo is backed by Ignition Partners, DAG Ventures and Benchmark Capital. It sold off its healthcare business last year to focus on the legal business. The company now attracts about five million unique visitors each month.