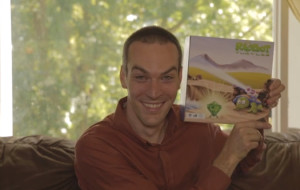 With three days left in his Kickstarter campaign, Dan Shapiro has more than eclipsed his $25,000 fundraising goal for Robot Turtles, a board game that teaches the fundamentals of programming to kids ages 3 to 8 years old.

As of this afternoon, the project has raised more than $480,000 from around 11,000 backers on the popular crowdfunding site.

This week on “The Next Big Thing” I sit down with Shapiro, a serial entrepreneur — known for startups such as Ontela and Sparkbuy — who has worked at companies including Microsoft, Google and RealNetworks. One of his startups was acquired  by Google, and he’s now is writing a book for O’Reilly Media.

[Listen via this MP3 file.]

We talk about creating a product that takes kids away from technology to teach them how to make technology. Dan, a father of twins, has taken a leave of absence from Google to become a board game inventor.

In addition to discussing the Robot Turtles project, he shares his top 3 tips for anyone looking at funding their own project through a site such as Kickstarter.

The Next Big Thing, hosted by Seattle media entrepreneur Jenni Hogan, is produced by KIRO Radio and MyNorthwest.com. Follow the show on KIRORadio.com, and subscribe in iTunes. Follow Jenni @jennihogan and jennihogan.com.