Dan Shapiro has made his mark as a Seattle software entrepreneur, creating startups such as Ontela and Sparkbuy.

Now, Shapiro, who is on leave from Google, is turning his attention to board games. That’s right. 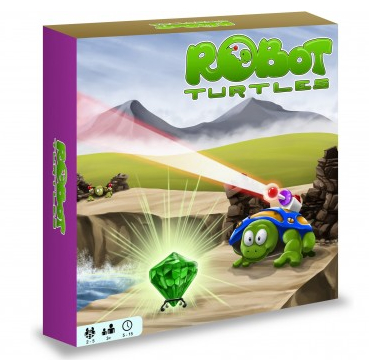 Shapiro, the father of 4-year-old twins, is creating a new board game called Robot Turtles, which he notes “sneakily teaches programming fundamentals” to those between the ages of three to eight. In fact, the inspiration for the game came directly from Shapiro’s own childhood, since he learned the Logo programming language (known in part for its use of Turtle graphics) at age 7.

To get things rolling, Shapiro today is launching a Kickstarter campaign. The goal is to raise $25,000 and get 1,000 copies sold, which will allow him to get the initial print run of the game going at a manufacturing company in Lansing, Michigan.

Those who pledge are expected to get the game by this holiday season.

In his pitch to the Kickstarter community, Shapiro said that he decided to build Robot Turtles as a board game rather than an app because he doesn’t have any trouble getting his kids to stare at a screen.

He also notes why kids love the game: It allows them to dictate commands to adults.

“The little programmers put instruction cards down, driving the turtles through the maze, but the grownup is the computer, executing commands on the board,” he writes. “At its heart, Robot Turtles is a game about bossing around adults. Just like programming is about bossing around computers.”