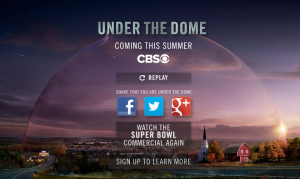 The content licensing agreements just keep on rolling in for Amazon, as the Seattle online giant just announced another exclusive subscription deal today with CBS.

Amazon will become the exclusive provider for Under the Dome, an upcoming series based on Stephen King’s 2009 novel. The show will debut on CBS on June 24 and episodes will be replayed for free on CBS.com, but for only three days. After that, the episodes will be available exclusively on Amazon’s Prime Instant Video service that comes as part of the $79 Amazon Prime membership.

That means for the first time, Amazon will have exclusive streaming rights for a show that’s still in-season.

“Adding a current season major network TV series like Under the Dome to the Prime Instant Video library so shortly after its live airing enables us to increase our exclusive selection of great TV shows and give customers access how, when and where they want to watch it,”  Brad Beale, Amazon’s Director of Digital Video Content Acquisition, said in a press release.

The news comes just days after Amazon announced it purchased exclusive streaming rights to the popular PBS series ”Downton Abbey.” It’s another win for Amazon in its streaming battle with Netflix, who recently premiered its own, exclusive original series “House of Cards.”

Under the Dome has a slightly-cool, slightly-creepy feature on its website where it asks for your address and then pulls up an image of your house inside a dome.