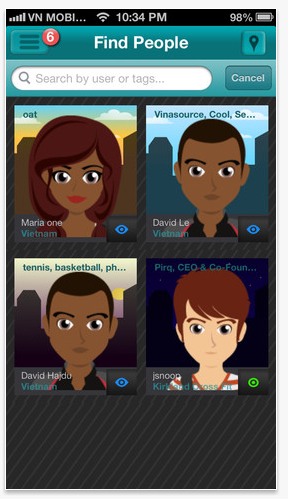 Anomo is a new Seattle mobile startup that’s looking to solve an age-old dilemma: How do you find that special someone?

The company, which recently landed a $255,000 seed round from Kiss.com founder Lee Zehrer; Pirq CEO James Sun and Microsoft vice president Amit Mital, has a unique approach to matchmaking.

It forces everyone to first interact via an anonymous self-created avatar, known in this case as an Anomo. This allows people to connect with one another through more substantive means, learning about common interests and even playing interactive games together.

As the company notes in its tagline, Anomo is a place where “first impressions are based on more than a photo.”

Sounds ambitious, huh? And, of course, transforming the way people have picked a mate for decades (largely by checking out how they look) is no easy task.

But the times, they are a changing. And founder Benjamin Liu, a former Microsoftie who previously founded InterActive Sports Media and software consulting shop Vinasource, thinks he can pull off this ambitious feat.

Working on Anomo for the past year, Liu tells GeekWire that the mobile app could “fundamentally change the way people interact and socialize” by encouraging folks to get to know one other based on their interest as opposed to what they look like.

That, of course, raises all sorts of questions about what sparks that first love interest.

But, before we delve into that, here’s more on how Anomo works:

Everyone starts by creating an anonymous avatar, which they control. Individuals can “check in” to various physical locations, say the local gym or coffee shop, and see if other Anomos are present. Over time, as you connect with people in the network, users can reveal more of themselves, perhaps hobbies or a profession. Eventually, once a trustworthy connection is made, a user can reveal their actual photo.

The first most obvious application of Anomo certainly revolves around dating. But Liu notes that the application goes much further, potentially helping business professionals connect at conferences or students to find study partners. He uses this example to illustrate his point:

Attendees at a conference check in to the hotel the conference is held at, look at the tags of the avatars around them, and make new business connections.  They chat with people with tags that interest them, and set up meetings if they find a connection.  For example, at a “Startup Conference,” startups can find people tagged as angel investors and VCs, while investors can look at the tags of entrepreneurs and their ideas.  Each side can hold comfortable and “anonymous” chats, and if they’re interested, choose to reveal more about themselves and do a “live” in person meeting if they find a good fit.

A number of startups are attacking this social discovery market, many in the online dating arena. But Liu said, in most cases, they require people to use real pictures and names, a roadblock that prevents many from disclosing that level of detail early on in the courtship process. 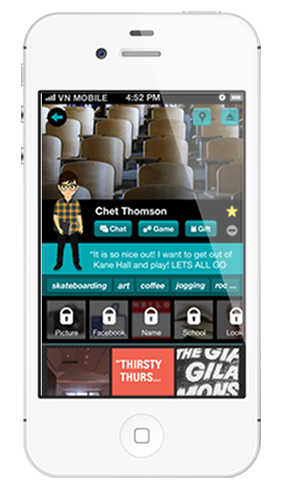 “In this day and age, with your name and a picture, I can find out your home address in two minutes,” says Liu. “Users are rightfully wary of such apps.” He also notes that many competing apps are proximity based, pointing out people who are within one or five miles of you. But Anomo is location based, meaning that users can interact with one another at an exact location.

“We’re tapping into the dynamic social network that consists of a user and all the people directly around him at any given time,” says Liu. “People that are sharing the exact same experience —  a Seahawks game, a lecture, a dining experience, a coffee shop. What I share in such an environment is so much more relevant and useful, than a wall post I make on Facebook in which 99 percent of my friends don’t really care that I’m looking for a study partner for Professor Oppenheimer’s Macroeconomics class. My dynamic social network does care. This is what excites me the most about Anomo.”

Liu is so confident in the Anomo approach that they’ve filed for a patent on the anonymous avatar revealing process. That process allows users to reveal bits and pieces of information, so another user can only see what is revealed.

Of course, there’s a big roadblock in front of any application that tries to connect people in real time. You need a critical mass of folks participating in any given geographic area in order for it to be worthwhile.

I asked Liu about this so-called “chicken and egg problem,” and he said they’ve been trying to address that by automatically finding people on Anomo who may share an interest and automatically checking people into neighborhoods.

“This allows the scenario in which I’m looking for someone to play basketball with down at the local park – I can make a post on the neighborhood page, and see if there are others interested,” says Liu.

In addition, the company is focusing all of its initial marketing efforts on students at The University of Washington.

“This affords us massive density, with a large user base in a small area,” says Liu. “We’ll be able to prove out the social and viral concepts of the app, learn from user feedback, and then expand our reach, one area or college campus at a time.”

Not mentioned by Liu is the fact that college kids also may not be weirded out by the idea of interacting with one another via avatars.

Here’s a closer look at how Anomo works.