It was supposed to change everything for Microsoft, creating a viable rival to Google and establishing the Redmond company as a force in online advertising.

But five years after Microsoft purchased Seattle-based aQuantive for $6.3 billion in cash — at the time the largest acquisition in the software giant’s history — little is left to show for it. Microsoft CEO Steve Ballmer’s initial promises to use aQuantive to “help maximize the digital advertising opportunity for all” haven’t panned out.

Last week Microsoft took a whopping $6.2 billion writedown, largely tied to aQuantive. Microsoft bluntly said that “the acquisition did not accelerate growth to the degree anticipated.”

But what really went wrong? Why was one of Seattle’s rising stars, a 2,600-person company with rapidly growing profits and revenue, unable to keep thriving under the umbrella of the world’s largest software company? And has Microsoft learned enough to avoid making similar mistakes with its $8.5 billion Skype acquisition or $1.2 billion Yammer acquisition?

In a series of interviews with GeekWire, former aQuantive executives and employees discussed why Microsoft’s bet didn’t work. They blame the degradation of aQuantive inside Microsoft on several factors:

But most of all, the former aQuantive staffers say it was simply a culture clash. It became increasingly difficult to combine the engineering-centric culture of Microsoft with the advertising-centric mindset of aQuantive.

“The task of evangelizing the business of advertising — not software — was akin to asking Willie Wonka to grow vegetables,” says one former aQuantive manager who has since left Microsoft. “No amount of explanation about ad revenue versus software revenue or Google’s plan to make software free could refocus a Windows-obsessed culture.  As far as online advertising was concerned, the more important and familiar task was building a better search algorithm.  Period.”

Many of the ex-aQuantive staffers we spoke to cited similar problems. At Microsoft, Windows dominated. And the attempts to dive into online advertising centered around search, largely around the revamped Bing search engine which launched in 2009.

That begs the obvious question: Why did Microsoft pay $6.3 billion for a leader in display advertising if it simply planned to turn the ship toward search?

That still baffles many ex-aQuantive staffers.

“Absolutely, it could have played out very differently. Now, again, if you are Microsoft you could say: ‘Well, we decided to focus on search, we are glad we did that.’ But maybe they shouldn’t have made the acquisition. Maybe they should have made the strategic decision about search earlier, and not acquired a $6 billion display company,” says another former aQuantive executive. “Clearly it could have played out differently if they had chosen to invest in display, invest in Atlas, invest in Drive and try to build those businesses, and then acknowledge that it is a different type of business, run it differently.”

Some of those technologies, namely Atlas and Drive PM, still can be found under the hood at Microsoft’s advertising unit. 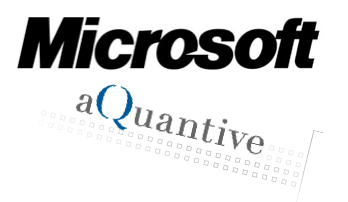 But make no mistake, they are shells of what they were. aQuantive’s Atlas unit, which at the time of the sale was a $160 million business growing 40 percent annually, now reportedly has a fraction of that amount of revenue.

For the most part, former executives say that Microsoft let aQuantive’s core technologies languish, pumping resources into search in an effort to catch up to Google, which was making its own inroads in display through the integration of DoubleClick.

It was a strategic bet, one whose outcome has not yet been determined. According to a report out this week by comScore, Bing’s search share now stands at 15.6 percent, up slightly but not a serious dent in Google’s well-established lead.

“It became apparent to aQuantive insiders very quickly that the combination was going to be an unmitigated disaster and waste of money for Microsoft. From the initial decision to put aQuantive and its management team under the helm of the absolute wrong Microsoft leadership — who had no knowledge or interest or skills in it — to the near-immediate sign that Microsoft did not know what to do with a strong and successful organization like aQuantive, to the very well-known history of Microsoft’s inability, for years, to integrate its own online ad services and technology initiatives internally, this acquisition had snafu written on its face from day one.”

That same employee said that Microsoft’s motivation for buying aQuantive was more defensive than offensive. In other words, Microsoft bought the company, and paid a big premium, in order to fend off other suitors. The bidding for aQuantive was competitive, one of the reasons that the value increased to $6.3 billion, more than double what Google paid for DoubleClick about a month earlier.

In other words, the defensive nature of the acquisition doomed it from the beginning. Microsoft wasn’t sure what to do with the assets once they got them, and then a strategic decision to invest heavily in search shortly thereafter sealed aQuantive’s fate.

“Whoever you are, if that is your key motivation then you’re setting yourself up for a huge challenge when you realize that you suddenly have all these great people who are the best in their field, and a business that you really have no interest in building or knowledge how to integrate. The result, sure enough, was that the aQuantive organization, and value, began getting dismantled: The best of the best of the team were sent off to different business units who were looking for smart people. The core aQuantive business of making money and contribution margin dwindled quickly.”

He added that it was a shame to see much of aQuantive’s hard work over 10 years basically flushed down the drain.

“If it were any other company, Steve Ballmer might have been fired for the loss which he knew, or should have known, it would be,” he said.

In a statement sent to GeekWire, Microsoft said that aQuantive’s tools remain an important part of the company.

“While the business did not perform relative to our projections, we have retained a number of highly talented employees from the acquisition and the deal continues to provide tools for our online advertising efforts,” the statement said. “It is likely that our standing in the online advertising industry would not be as strong today were it not for the people and technology we acquired from aQuantive.”

Are there lessons to be learned from the failed aQuantive acquisition?

Many of the ex-aQuantive employees we interviewed said that Microsoft’s culture makes it hard to integrate online services, which require more frequent product releases and constant contact with customers. The long product cycles of Windows and near monopoly of the product create a much different creature.

But at least one former executive noted that the company appears to be taking more of a hands-off approach when it comes to Skype, the communications giant that Microsoft bought for $8.5 billion last year. Skype employees even received badges with the Skype logo, which Nick Wingfield of The New York Times earlier this year said was part of a symbolic move to give the unit a “longer leash.” (It’s too early to say whether that will occur with Yammer, the online collaboration service that Microsoft agreed to purchase for $1.2 billion last month).

By contrast, Amazon.com has had some success buying companies with very different corporate cultures, successfully integrating them by allowing them to do their own thing. The best example of that is Zappos, the online shoe retailer whose open culture runs counter to Amazon.com’s stiff and sealed-off approach.

The differences between Microsoft and Amazon in this regard are not lost on one former aQuantive executive who suggested that Microsoft’s meddling and need for control actually gets in the way. 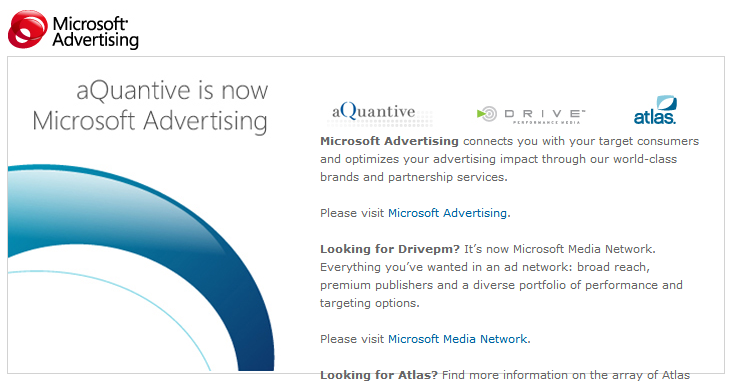 “I think they end up damaging themselves,” he said. “If you look at Amazon’s model, they have a model that says: ‘We are going to be cannibalized, but let’s do it ourselves.’ Microsoft has a model that seems to say: ‘Let’s hope we don’t get cannibalized, and if someone else does it, then we will copy them, and we will try to crush them.'”

Granting that level of autonomy, let alone resources, did not happen with aQuantive. That’s one of the reasons why some think the only way for Microsoft to succeed in online advertising would be to split off the Online Services Division from the rest of the company, a suggestion that GeekWire’s Todd Bishop pondered in a post this week titled: “How to break up Microsoft: Maybe it’s not such a crazy idea.”

Nonetheless, the integration of Skype could very well be a sign that Microsoft learned a very expensive lesson on aQuantive. Whether that’s the case or not, ex-aQuantive staffers still can’t believe that a business they helped shape and build into an online advertising powerhouse is essentially no more.

“aQuantive was not a smoke-and-mirrors business that oversold its abilities.  While I can’t say whether it was worth $6 billion at the time, it could’ve breathed new life into Microsoft had they allowed it to,” one former manager said.  “It would’ve easily paid for itself and demonstrated that Microsoft was a serious contender in the ad biz.  Egos and culture clashes aside, Microsoft was generally disinterested in the advertising business, despite lots of industry lip service.  Many of us spent over a decade building a company with a youthful, smart, relatively ego-free culture that could not be stopped.  We were all sad to see it end the way it did.”