Our guest on the latest GeekWire radio show and podcast was Joe Justice of Wikispeed, a project that’s aiming to disrupt the auto industry with a 100 mile per gallon car.

Wikispeed is taking a very unconventional approach to engineering and development of these cars.  They utilize lean manufacturing methods, a movement that has been popular in the tech startup space.  long with that, they also use a collaborative Wikipedia-esque work format, with teams all around the world working on projects, connecting with one another online.

The group is in the final day of a fundraising campaign to take a commuter-friendly version of its vehicle from prototype to production.

If you missed the show, or just prefer text, here are highlights from Justice’s conversation with GeekWire’s Todd Bishop and John Cook:

For those people who aren’t familiar with Wikispeed, how do you describe it?  What is this project?

Justice: Wikispeed is a distributed, collaborative team of more than 150 volunteers in more than 15 countries now.  We make ultra-efficient transportation.  We have prototypes of our 100mpg cars on the road now and we’ve sold one!  They are $25,000, or about the same price as a new Prius but about twice the fuel economy.  We have two-seat and four-seat versions.

Who bought the first one?

Justice: A software developer in the Seattle area.  He asked to be anonymous, but now there’s tweets from him all over say “I can’t wait to get my car!” and excited stuff like that.

Justice: The thing we do that is really unique right now is we’re modular.  We’re modular in the way software is, we’re loosly coupled.  By that I mean that if you change one part of the car it doesn’t change the rest.  So you can change it from a gasoline to an electric car in about the time it takes to change a tire (even ethanol, methanol or biodiesel).  You can switch the car from a convertible to a pickup truck, and that’s completely unique in the automotive landscape right now.

So what about the gas milage?  You say it gets 100 MPG. How does that happen?  We’re driving around in cars that are hybrids that can’t even get that, so how are you getting 100 MGS out of this car?

Justice: Well it’s straightforward physics but it took us a lot of research to find the right recipe that would allow us to do that and be full on road safe and road-legal. What we needed to do was get to half the weight of most commuter cars and we were able to get to a little lower than that while still getting top-ranked safety scores in simulations of all the impacts and our physical testing.  Then, we needed a much more slippery, aerodynamic shape.  Luckily for us, that made it look like a race car.  So we make it look like a LeMans-style racing car and we make it really really light but still have the crash safety rating that we care about (front, side, rear, roof-crush, rollover) and viola, you have about twice the fuel economy for whatever engine you put in there.  We use an engine made by America Honda Motor Company that’s phenomenally efficient in its conversion of gasoline to motive force, and putting it in such a light weight and slippery package, we get 104mpg city and 114mpg highway in simulation of the EPA city and highway driving cycles. 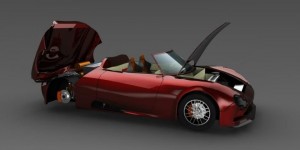 So what are the materials that you’re using to make it so light?

We use aluminum modules with carbon-fiber on top.  Traditionally that would be a really expensive way to build cars, but in this case we used agile methods like agile software teams do, and test driven development like really quick software teams do, and that let us develop ways to work really inexpensively with those high tech pieces of material that are normally reserved for aerospace and the most expensive cars on the road.  We have them in something that we sell for $25,000.

Since you’re a distributed team and at the end of the day you have a physical product, somebody has to put the thing together.  How do you manage that and who does it?

So since the car splits into eight pieces or modules, we Fedex/UPS/USPS those all around the country and all around the world.  Modules at any time are being shared.  The CAD (computer assisted drawing) of all those modules, we share through Dropbox and Google Docs.  Whenever a shop is going to build a module they just build from the most recent version of the CAD that’s been tested and verified.  A CAD is a 3D image of the car that we can spin around and test, and then we use rapid prototyping tools to print those out all over the world.

Can you talk a little bit about Tesla? They’re doing very fuel-efficient vehicles as well, but they’re a for-profit company. Do you see them as competition or how does that look to you?  You’re a non-profit, correct?

Justice: “We view everyone else as future partners.  Our application for non-profit status is in review right now.  It hasn’t been approved yet but we’ll see what it comes back with. Right now we’re a C-corp.  I was actually just reading the article on GeekWire about social corporations and the reactions to it, and I had a lot to think about there.  That might be the direction we’ll go depending on how our not for profit status goes.  But, absolutely, we’re in it for the environment and making a buck would be a nice benefit, but it’s not nearly as important as our goal of getting at least 10,000 ultra efficient cars on the road.

Can you describe what it’s like in different Wikispeed facilites and where you guys work?

So our Vietnam team meets in different coffee shops where they have internet access and they look at the 3D drawings and the status and help set up our internship programs.  The Houston, Texas team uses a two-car garage attached to somebody’s house.  The Germantown, Maryland team has a rented commercial space and then our shop that is closest to here, in Lynnwood, Wash., near Alderwood Mall, uses a four-car garage.  We vary from using people’s spare bedrooms and walk-in-closets all over the world to full-on commercial spaces, depending on what we have available. It’s part of our frugal engineering campaign.

GeekWire airs on 97.3 KIRO-FM in Seattle at 7 a.m. every Saturday, and 8 a.m. and 2 p.m. every Sunday. The show runs every weekend on GeekWire.com. You can get every episode using this RSS feed, or by subscribing in iTunes or Zune.

Listen this weekend for another new show, with guest Stefan Weitz of Microsoft Bing.

Is the project basically headquartered here in the Seattle region?  Where do you define the actual homebase?

Justice: Well, if you’re thinking about something like Wikipedia or these modern knowledge management sites and services, and you ask where are they headquartered, you could say yes they do have this location but they have contributions all over with key members all over.  It’s essentially headquartered wherever someone’s phone is to access the site.  We’re pretty similar structure.  That said, most of our testing is done here in Lynnwood, Wash., just north of Seattle.

So you’re getting towards building more production vehicles and I actually wanted to ask you a bit more about that.  You actually have a crowdsourced funding project where you’re raising some money to move your project forward. Tell us about your effort to raise money from the crowd and what you’re planning to do with it.

Justice:  That’s right, we’re on Indiegogo until July 12th at midnight.  What we’re crowdfunding is our ultra-efficient, comfy, commuter car.  So right now our prototypes are barebones, they’re like racecars.  They’re very fast and very efficient and road legal, giving us road legal test data, but what they’re not is comfortable.  We want cars that people are wanting to drive everyday into work to save big bucks at the gas pump.  We develop really inexpensivly all over the world, but the testing is expensive.  Each crash test costs us $10,000!  We’re crowdfuding essentially our crash test and some of our EPA fuel economy testing.

Since you’re such an agile company, doesn’t dealing with government crash test regulations, ect. slow you down?

Justice: The great thing about how the government sets up automotive testing is that it’s test driven.  So by having the tests happen before we build the whole product we can build the leanest, meanest, fastest, product that passes those tests, we’re able to iterate really really fast.  The pace of development at most automotive companies is a new model about every 10 years with modified models every 7-5 years.  We can iterate about every 7 days.

Most of the cars that we are driving have come off of a traditional assembly line.  Toyota has improved upon the Henry Ford model but that seems like more of a evolution while what you seem to be looking to do is a revolution. In the future, do you see the cars that we’re driving around being modeled after what you guys are doing?

Justice: We’re seeing a lot of interest from a lot of car companies and manufacturing companies and other engineering companies in this process.  They asked us what it’s called and we didn’t know, so we decided to call it Extreme Manufacturing.  We had a chance to present to John Deere twice this year and next week I’ll be going to New Zealand to launch a prototype team at an engineering firm there.  Wikispeed does consulting now!  People are beginning to think that for them to be relevant or competitive, they need to give a serious look at this new way of developing product because some of our development pieces are 10,000 percent better than industry norms.

Does it scale when you get to the manufacturing? And how do you roll that out?

Justice: Well, we’re in 15 countries now, so we think so.  We do it through micro-factories, at least that’s what we’re testing now.  This is a lot like the way that Zynga, Twitter, Facebook, or Microsoft Live 365 balance their cloud servers.

That seems like a bit of a leap. What do you mean by that? What are the similarites?

Justice: So they package their server farms into shipping containers and they stack them on-top of each other near their centers of load, where people are using their services the most.  Typically they try to put it next to green power like hydropower.  We’re trying to do the same thing for physical manufacturing.  We’re developing microfactories that are inside shipping containers.  We’re able to to load balance them by sending them near the area where people are interested in our cars.

Listen to the show below or directly via this MP3 file. The conversation with Justice starts at 12:30, after our news roundup.

GeekWire airs on 97.3 KIRO-FM in Seattle at 7 a.m. every Saturday, and 8 a.m. and 2 p.m. every Sunday. The show runs every weekend on GeekWire.com.  Also access the podcast archive on GeekWire.

Check back this weekend for another new show, with guest Stefan Weitz of Microsoft Bing.