University of Washington President Michael Young today announced an ambitious plan to double the number of startup companies coming out of the offices, research labs and dorm rooms of the state’s largest research institution.

In a ribbon-cutting ceremony, Young called the opening of the New Ventures Facility at the UW Center for Commercialization an exciting day the university, its students and the state of Washington.

The new incubator, with roughly 23,000 square feet in Fluke Hall, will have space for 25 startup companies conceived by faculty, researchers or students of the UW.

The goal is to foster an environment where entrepreneurial ideas are not only encouraged, but put into practice.

“Over time, universities have begun to understand that the process of doing good, not the process of making money, not even the process of creating jobs, all of that is a byproduct of a very simple principle, which is what we do in the laboratories, what we do at a research-based university is really designed to make the world a better place, ” said Young in remarks today outside of Fluke Hall. “But if it stays in the university, it doesn’t accomplish its goal.” 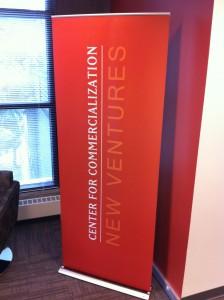 Young then quipped: “It doesn’t hurt to have a few extra Porsches in the faculty parking lot. I don’t deny that for a moment.”

Currently, three companies are taking advantage of the new office and lab space. They include: Nexgenia, which is using polymer-based nanotechnology to improve the speed and sensitivity of clinical laboratory tests for the diagnosis of diseases; Envitrum, which converts low-value waste glass into versatile green building materials; and VIxim, a cloud computing security startup.

UW faculty, researchers and students in a variety of fields — from clean tech to software to — life sciences can apply to the incubator. They are accepted for a year-long term, which can be extended.

Vikram Jandhyala, co-founder of VIxim and the chair of the UW’s electrical engineering department, said he looks forward to making the short jaunt across campus to his new office space in the incubator.

“The fact that it is just walking distance from my department … that’s a huge win,” said Jandhyala, whose co-founder will be located in the new space. “I can just walk over when things are needed. This is absolutely perfect.”

The goal of the New Ventures Facility is to help the university spin out about 20 startups in the next three years. It is part of a larger commercialization effort at the university, one being led by vice provost Linden Rhoads who is also leading the charge of the university’s new W Fund venture capital fund.

“This is much more than a building for us,” said Young, who arrived at the UW last year from the University of Utah. “This is a flag raising exercise. This is an opportunity for us to say that this is an important part of what we do.”

In fact, Young had a message for his former employer, noting that the University of Utah (historically, one of the stronger universities for tech transfer) had been “lapped” by the UW.

In noting the progress under the leadership of Rhoads, Young said that the UW is second in the nation when it comes to research funding dollars (now at $1.5 billion), even exceeding Stanford University’s $1.1 billion haul.

“We are delighted to help Stanford become a better university, and tell them how to do this,” Young said to laughs from the crowd. “That is an enormous amount of exciting energy and work that is proposed in this university.”

Rhoads thanked members of the business and venture capital community for their support in the new effort, as did Young who joked that they made sure to reserve coveted parking spots for when CEOs, entrepreneurs or venture capitalists want to pop by for a visit at the new incubator.

Here are Young’s full remarks from the event today: