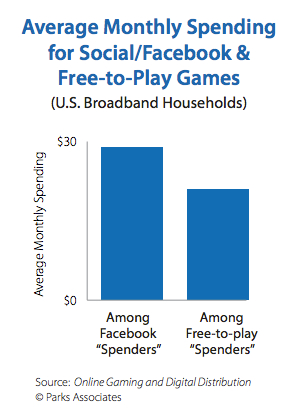 The underlying economics of video-games have been undergoing a radical transformation with the shift toward “free-to-play” titles that offer a basic experience at no charge and make money instead by selling additional content and other in-game items.

Many of us now play games this way, on Facebook and other platforms. And while it might feel like we’re spending less as a result, many of us are shelling out as much or more, cumulatively, as people who are buying games the old-fashioned way, according to a new research report released today by Parks Associates.

“Players often cite the microtransactions model as a way to reduce their gaming expenditures because it allows them to spend according to their budget and play patterns,” says research analyst Pietro Macchiarella as part of his broader report on trends in digital gaming. “However, Parks Associates research reveals that people who spend money on these games tend to spend amounts that are comparable to the cost of traditional games.”

For example, the company found that people who spend money on Facebook games spend about $29 per month, while others who pay for virtual goods and upgrades in free-to-play games spend about $21 per month. That compares to the $24-$27 montly average spent on new games by “incidental and occasional gamers.

For more background on this trend, see this great behind-the-scenes explanation delivered by Valve’s Gabe Newell at a WITA conference last year: How Valve experiments with the economics of video games.