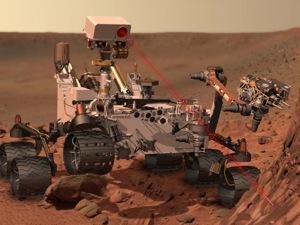 Rovers, particles, and skydiving from the edge of space. And that was just the beginning.

Earlier this week, GeekWire documented our favorite lowlights of 2012 with our list of biggest Tech Debacles of the Year. Now it’s time for the highlights, starting with a series of breakthroughs and accomplishments at the intersection of technology and science. Continue reading for our 2012 Tech Triumphs of the Year.

Curiosity Lands on Mars: The latest Mars Rover, approximately the size of a car, landed on Mars on Aug. 5 after a series of high-flying maneuvers so intricate and precise that NASA dubbed the entry, descent and landing the “Seven Minutes of Terror.” Watch the whole thing from the perspective of NASA Jet Propulsion Laboratory Mission Control in the video below, and skip ahead to 13:40 to see the best part — an amazing accomplishment for science and a landmark moment for space exploration.

GeekWire’s Emily Shahan documented the scene at Seattle’s Museum of Flight, as former members of the Mars Rover team celebrated the landing.

Capturing the Dragon: Yes, it was a big year in space. In May, the SpaceX Dragon capsule became the first commercially developed spacecraft to dock with the International Space Station — a milestone for the commercial space industry as the U.S. retired the Space Shuttle program.

Jumping from the edge of space: Austrian daredevil Felix Baumgartner grabbed the attention of the world on Oct. 14 as he inched out of his capsule from 128,100 feet high in the sky and began a record-setting 24-mile fall back to Earth. It was a historic moment for Baumgartner, who reached record-setting speeds of 833.9 mph, breaking the speed of sound in the process. It was also a monumental moment for Red Bull, the energy drink company that sponsored the event.

Google Glass Skydiving: Slightly closer to home, Google’s demonstration of its “Project Glass” glasses in June started with skydivers in a blimp over San Francisco, wearing the company’s Project Glass prototypes to show the view from their perspective in a Google+ Hangout as they floated down for a landing on top of Moscone Center, site of the event. From there, the prototypes were delivered down to the conference call by stunt cyclists and a climber rappelling down the side of the building.

Yes, it was the craziest keynote stunt ever.

Microsoft employees give away $1 billion: With Bill Gates and CEO Steve Ballmer both on hand, Microsoft celebrated its 30th Employee Giving Campaign in October by announcing that it had raised $1 billion in cash since 1983 for approximately 31,000 nonprofits and community organizations worldwide. A landmark accomplishment, shared by thousands of Microsoft employees past and present. 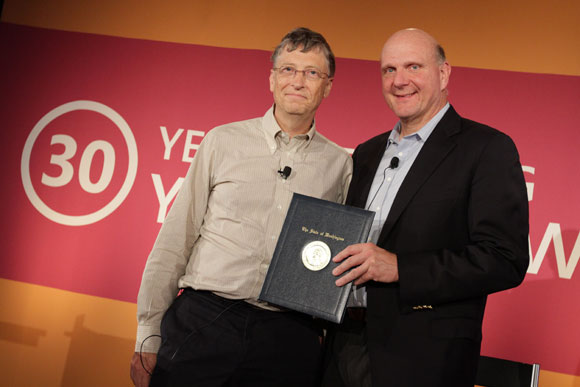 A major new VC fund: Turning to the world of venture capital, this milestone was a big one for the Pacific Northwest tech scene. Madrona Venture Group closed a $300 million fund in June, beating its original targets of $250 million. It marked the biggest venture fund for Madrona since the firm was founded in 1995.

Madrona made a name for itself with early investments in companies such as Amazon.com, Isilon Systems and Sharebuilder, will continue to focus on early-stage investments in the Pacific Northwest. Its main areas of interest include consumer internet, enterprise software, digital media, online advertising, mobile and cloud computing.

Booking Tom Petty: This one started out as a debacle but ended as a triumph. Brian Valentine, a senior Amazon.com executive known for his past work on Microsoft Windows, was allegedly swindled out of more than $165,000 when attempted to book Tom Petty to surprise his wife at their wedding reception, after “after conducting some research on the internet” to find what appeared to be Petty’s management company.

Valentine, who is in charge of Amazon’s e-commerce platform, figured out what was going on after contacting actual Tom Petty’s management company about the booking, only to be told that they had no idea what he was talking about, according to a criminal complaint.

Here’s the triumphant ending: Valentine was ultimately able to work out an arrangement to get the real Tom Petty to play at the wedding.

An incredible light show: What happens when you turn a bunch of photographers, artists and sports geeks loose on a pro football and soccer stadium? Well, just take a look at the absolutely amazing “Midnight Lights” video created by Bodega Studios, a video in which CenturyLink Field is transformed into a massive work of art. It was a massive undertaking and an impressive technological trick. GeekWire’s John Cook interviewed the people behind the project to find out how they did it.

It’s a particle! Cheers rang out around the world as scientists analyzing data from the giant scientific instrument known as the Large Hadron Collider reported that they had found a new particle that looked and acted a lot like the Higgs Boson. The landmark discovery is key to understanding why elementary particles have mass, and may explain other elements of physics.

Sally James of the Northwest Science Writers Association documented the scene in Seattle for us, as science geeks gathered at a bar for a play-by-play rundown of the action.

Victory over SOPA: Some of the largest sites on the Internet demonstrated the power of their collective voice when they rallied to kill the the Stop Online Piracy Act and Protect IP Act. And that blackout of Wikipedia didn’t hurt, either. Opponents said that SOPA and PIPA went too far by allowing the shutdown of sites accused of enabling copyright violations, which would have received an expanded definition under the bill.

One of the most outspoken opponents was Cheezburger’s Ben Huh, who took on NBC Universal’s Rick Cotton in this PBS Newshour segment.

GeekWire’s John Cook and Taylor Soper contributed to this post.

Previously: From Apple Maps to Oprah’s iPad: The 10 biggest tech debacles of 2012