REDMOND, WASH. — Before he began another exciting week running Microsoft, a young Bill Gates sat down at a Sunday evening dinner with the folks and heard a question from his mother.

“When are you going to get involved in giving?” Mary Gates asked her son.

Back then, more than 30 years ago, Gates was reluctant to “distract people from writing code day and night.” But that changed, and Thursday afternoon Gates returned to the Microsoft campus to mark a big milestone for the company’s philanthropic efforts. 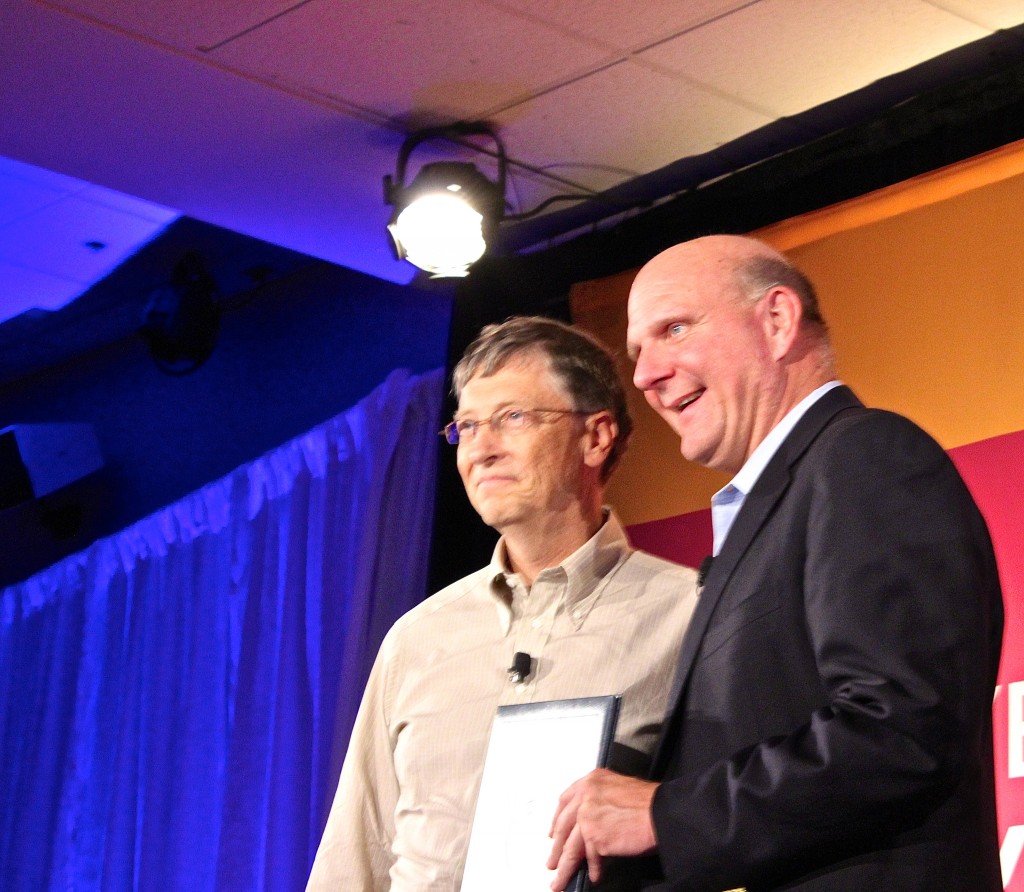 With Gates and CEO Steve Ballmer both on hand, Microsoft celebrated its 30th Employee Giving Campaign by announcing that it has raised $1 billion in cash since 1983 for approximately 31,000 nonprofits and community organizations worldwide.

Gates, whose public appearances at Microsoft have been rare since leaving day-to-day duties, had the 300 or so Microsoft employees at the company’s conference center in Redmond laughing with his first words.

“Well, I come back for historical perspective when it’s needed,” he joked as he explained the roots of the campaign.

There was no specific mention of Thursday’s earnings report, or the upcoming launch of Windows 8 and the Surface, but Ballmer alluded to them in the context of the philanthropic milestone.

“It’s an incredibly exciting time for Microsoft,” Ballmer said. “I certainly think we’ll look back at this year, in every sense, as one of the most important times in our company’s history. We’ll remember it certainly for Windows 8 and the remarkable wave of products that we have coming, but I think we’ll also remember it as the year as we set out on the next part of our journey down this path to corporate citizenship. A billion is great start, but not a place to stop.”

Ballmer called the $1 billion figure “mind-numbing,” and noted how Microsoft employees have stepped up during times of crisis. He also announced a $25,000 grant to the top four organizations that have received the most funding from Microsoft employees over the past 30 years: United Way of King County, World Vision International, Seattle Children’s Hospital Foundation and the American National Red Cross.

Washington Gov. Christine Gregoire was also on hand, joking that she wished she had $25,000 to give but said “I’m from state government and I have no money.” Jokes aside, the governor expressed her gratitude to the employees for contributing more than $50 million to Washington state non-profits in 2011 alone and over $520 million in the past 30 years.

“Amazing things have happened to people because of your contributions,” she said. “You have made people’s lives better and literally saved lives.”

Gates spoke about how he’s seen first-hand how the money is helping around the world.

“Wherever you go, people are very curious as to why the U.S. has a tradition of creating non-profits that draw in people’s time and resources to help solve people’s problems,” Gates added. “Every country wishes they had this.”

Keeping this up for 30 years is certainly an impressive achievement and certainly an area that Microsoft has led among tech companies over the years.

“It started with Bill, his mom and dad and really did become part of the culture of the company,” said Smith, Microsoft’s executive vice president, Legal and Corporate Affairs. “You don’t see something touch this number of people for 30 years in a row unless it really becomes part of the fabric of the entire organization.”