What happens when you turn a bunch of photographers, artists and sports geeks loose on a pro football and soccer stadium? Well, just take a look at the absolutely amazing “Midnight Lights” video created by Bodega Studios, a video in which CenturyLink Field is transformed into a massive work of art.

We’ve watched the spectacular light show several times now, and kept asking ourselves: How did they do that?

Turns out others were curious too, with more than 400,000 views on YouTube and dozens of comments since it was posted earlier this month.

Word is that other sports teams have taken notice as well, and have reached out to Bodega about conducting similar shoots for their stadiums. Also, the Sounders are considering using the video to get fans pumped up at home games.

We chatted via email with Jimmy Diebold and Clint Goldman of Bodega to get the scoop on the project, born out of their love of football.

GeekWire: How did you put the video together?

GeekWire: What equipment did you use to shoot it? 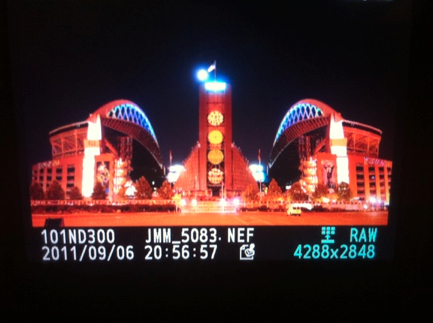 Jimmy Diebold: “Mixture of cameras. I rented a 5D, a couple extra 5Ds were brought. Volunteer photographers also had some Canon 1Ds, a Pentax, and lastly a couple Rebels.

Clint Goldman: “I picked up tripods and heads all over town and we brought extra long lenses for people to use. The local photographers came quite equipped and prepared to help us out in any way. Without the local support, this film would never have been made and we are both grateful for their support and enthusiasm for our project.”

GeekWire: Was this coordinated in some way with the Seahawks? If so, how?

Clint Goldman: “Yes, we received a lot of support from the Seahawks/Sounders. Kurt Shaffer was our point person and he made press passes available to us so we could scout the Raiders/Seahawks game and the stadium. He then met with us the day of (the shoot) and put us in touch with Cliff Barnes. Cliff was with us the entire night and managed to scour every available light switch in the entire stadium, There were a few lights that we never were able to turn off, but that was the exception to the rule.”

GeekWire: How long did the shoot take?

Jimmy Diebold: “I scouted the stadium during a pre-season game. Then I spent a couple days scouting vantage points around the stadium and searching for volunteer photographers. The big day: Around 5 p.m. we shot some locker rooms; 7 p.m. met up with volunteer photographers and gave them the game plan while the lights were being turned off; 8 p.m. to 11 p.m. we shot the east side of the stadium. Some volunteers left. 11 p.m. to 1 a.m. we shot the west side. Then from 1 a.m. to sunrise my director of photograhy and I shot other elements: suites and hallways. I was staying at a hotel nearby where I had my camera capturing time-lapse of sunrise/sunsets the day before.”

GW: How did you coordinate this?

Clint Goldman: “This was super challenging. We knew that it might take up to 30 minutes to fire up each bank of light(s).”

GW: And how was the video set to the music?

Jimmy Diebold: “After the shoot, I made a mock version with music and freeze frames to get a feeling of how the shots might cut together which then gave me some thoughts on the animation with music. In Photoshop, I organized and labeled the still frames, considering ahead how the lights were going to be animated; such as how long, how bright, and which direction. I also cleaned up any inconsistencies, then resized and cropped. This was then imported as a single project into After Effects. AE was all animation, connecting all the layers using code. From the other end, all the sounds were marked in final cut and brought back into AE. Figuring out all the sync points and light characteristics was a bit of a trial and error at the beginning. The next step was assembling in Final Cut. Made adjustments to the song, adjustments to clips, going back to AE and tweaked some of the animations. (Musician) PatrickReza shared some key feedback on the timing and sync points. Most of the levels and mood were set in Photoshop but the final step was a refined color transfer with Ntropic.”

GeekWire: What was the purpose of the video? Was it for some promotional purpose, to create buzz for the Seahawks/Sounders?

Clint Goldman: “No, the reality of this project from the very beginning was an art film. Jimmy, while he was living in NYC, always looked out the windows at the lights and had this idea to create some sort of symphony of lights. He is also a rabid football fan. So, when the lock-out came, he put 2 and 2 together and wanted to make a film for the fans. The stadium is its own character in the narrative. Even if the people and the players are not present the stadium is alive, waiting for when its seats and gridiron are next inhabited.”