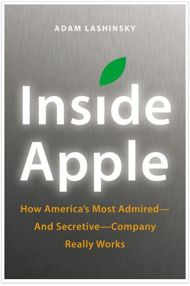 Fortune senior editor Adam Lashinsky stopped by the offices of Zillow earlier this month as he touted his new book: “Inside Apple: How America’s Most Admired and Secretive Company Really Works.”

The interview — conducted by Zillow Chief Marketing Officer Amy Bohutinsky — provides some interesting insights into the culture of Apple and how Lashinsky tried to break down the walls as he put together the book.

Lashinsky’s book comes at an interesting time, given the passing of Apple co-founder Steve Jobs and the new regime being led by CEO Tim Cook.

“They are controlling down to the precise words that they use when they communicate with the outside world about the product, and they are controlling about who can do that,” said Lashinsky, noting that he relished the challenge of trying to tell the story of Apple.

“Users and consumers love Apple. Apple literally has a happy shiny veneer to it. It makes you feel good. And there is nothing shiny or happy about inside the doors of Apple. And, it is true. And you don’t want to overgeneralize, and you don’t want to say there is no joy. Because there is some, particularly in the engineering corps…. But, by and large, it is a very confrontational, work-oriented place.”

Here’s a segment of the interview via Zillow:

Here’s more from Lashinsky’s talk from the Zillow blog.