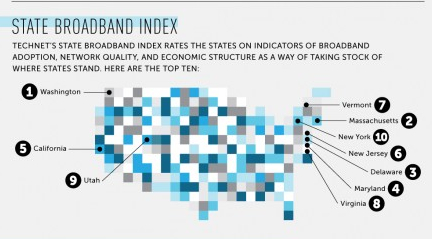 Perhaps this could be the state’s new tagline: Welcome to Washington, the home of the nation’s best broadband infrastructure.

OK, not too catchy.

But a new report released today by TechNet ranks Washington as the best in the nation for broadband when it comes to adoption, network quality, and economic structure. The state ranked ahead of Massachusetts, Delaware, Maryland and California. 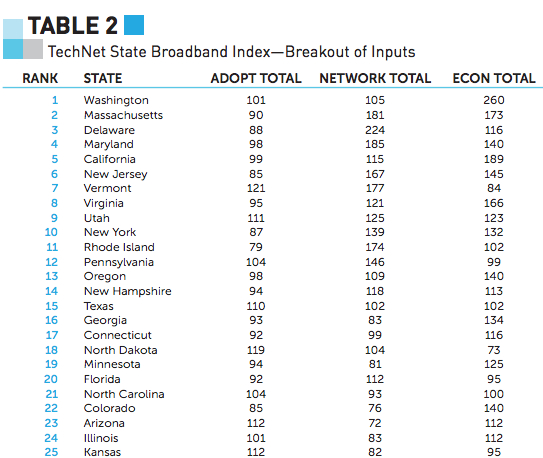 Of course, Washington state officials are already jumping on the report as an example of why this is a great place to do business. Governor Chris Gregoire, quoted in the press release from TechNet, notes that the study “confirms the importance of high speed Internet access in our state.”

The report didn’t get into specifics about broadband speeds, though Washington ranked lower on the scale when it came to network quality. (Delaware achieved the highest score in that category). It also didn’t compare individual states to other countries, some of which have routinely shown much higher broadband penetration and speeds than the U.S.

Here’s what the report said about Washington:

The state of Washington tops the TechNet State Broadband Index, driven by an economy that has a strong orientation toward (information and communication technology) and apps development. In picking apart the three main inputs to the index (adoption, network quality, and economic structure), Washington leads on the strength of its ratings on economic structure. With the presence of Microsoft and Amazon, as well as companies like F5 Networks and T-Mobile, and others, Washington has an economy which demands high speed connectivity.

You can read the full report, titled “TechNet 2012 State Broadband Index: Where States Rank as They Look to High Speed Connectivity to Grow Strong Economies and Vibrant Communities,”  here.

Broadband in the U.S.