I tuned in to the presidential election results last night with a few friends, with a bowl of chili on the kitchen table and NPR analysis on the radio.  No matter what your political persuasion, it was an impressive victory by President Barack Obama.

I hadn’t really thought much about the election in terms of my job here covering startups — until I spoke this morning to Seattle entrepreneur Dave Cotter (See the story of his new startup here). He asked me what lessons I thought could be applied from the Obama campaign, and it got me wondering (since we’re in the midst of building our very own startup here at GeekWire).

The lesson I took away: Persistence.

Even when Obama was battered and bruises after the first debate with Mitt Romney, he pulled things together and got his campaign back on track. That happens in startups all of the time. Isilon co-founder Sujal Patel told me recently that running a startup is like driving a bus with four very wobbly tires, just trying to keep the thing going in the right direction. If one tire falls off, as was the case at Isilon and with Obama after the first debate, you’ve got to get things back on track. That’s perhaps the biggest lesson I took away from campaign.

As for Cotter — who previously co-founded Mpire before going on to Amazon.com and starting his new company SquareHub — the lesson was all about segmentation and knowing your base. Cotter pointed out Obama’s huge support in the Hispanic, women and youth communities, a core of the president’s support.  Obama, he said, basically understood his “market” better, a market that happened to be a bigger business opportunity than Romney’s base. “Make sure your base is big enough to support your business,” said Cotter, adding that

I asked a few of my followers on Twitter what startup lessons they took out of the campaign, and here’s what some of them had to say. Seattle attorney Venkat Balasubramani offered an important lesson on fundraising when he quipped: “I hope “raise $924mm” is on the list of tips! :-)”

Fundraising aside, which of course is critical to any startup, here are some other suggestions. What lessons did you take away from the campaign — either from Obama’s victory or Romney’s defeat? 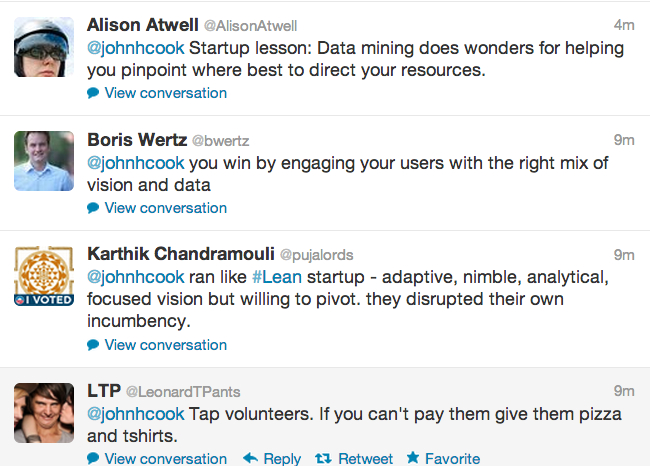