Editor’s Note: We’ve got a fantastic lineup of speakers on tap for GeekWire’s Startup Day, taking place Saturday, Sept. 22nd at Meydenbauer Center in Bellevue. Among the entrepreneurs on the agenda are Box CEO Aaron Levie; Zulily CEO Darrell Cavens; and many others. It is going to be an informative and high-energy day for those in the midst of building their startups (or those unsure about taking the plunge).

As a warmup to the big event, we’re going to go deep into the archive to pull out some of our favorite talks from year’s past. Enjoy these pearls of wisdom from some of the best, and make sure to join us on September 22nd for even more insights.

Today we’re featuring Todd Hooper‘s talk on Customer Development from Startup Day 2010.  Hooper is a startup veteran who started his first business at the ripe age of 16 in the video game space.  His current company, Zipline Games, which recently raised funding, has seen recent success with the release of their mobile game, Wolf Toss, along with their platform, Moai.  They were also named “Startup of the Year” at this year’s GeekWire awards along with “Best Seed Stage Company” at the WTIA awards.

Here are some key snippets from his talk:

What is customer development? “It’s a process to increase the odds of our startup being successful.  It’s something that we’re going to do at the same time as when we’re starting our product development, so we want to start it on day one and not leave it until later.”

How to develop your product early on: “If you work at Microsoft or Google or Amazon, you have hundreds of millions of customers when you’re developing a new product and you’re pretty sure you’re going to get some attention.  Now you just have to create something that’s good for some percentage of those people.  Maybe a few million people would be good.  To do a startup you really want to turn that on it’s head.  You want to find just 20 to 30 people who really love what you are doing.  It’s not about finding the ten percent of the ten million people on day one, it’s about finding those first 20 to 30 people because they will be the people that will be educating you on what type of product to build.” 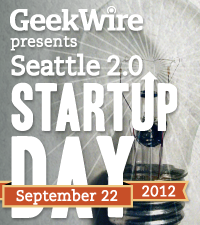 Planning to make the startup plunge, or already in the deep end?  Don’t miss Startup Day 2012 — Saturday Sept. 22 in Bellevue, as Box CEO Aaron Levie and other startup vets help you find your roadmap to success.

3. You can segment an existing market with a low price.  I was the vice president at WatchGuard when we went public.  Apart from paint our products red, which was a very important strategy, we took a $20,000 enterprise product and created a $4,000 version that was very easy to use.  It was for the 80 percent of people that didn’t want to spend $20,000 and didn’t need all the bells and whistles.  Turns out that is a very effective strategy.”

Find customers and test your hypothesis: “Don’t try and pitch your idea when meeting with a potential customer.  There’s one very important rule here and that is to shut the hell up and let the customer talk.  If you’re anything like me, you always have something running in the back of your head and you want to hear the sound of your own voice but please fight that instinct.  Shut up and let them talk and let them tell you what their problems are.  You’re going to come away from that knowing something you didn’t know before.  Now you’re going to go out and do that thirty times.”

Be ready for a reality check: “Once you’ve done that thirty times, get your whole team together and say “Okay, let’s have a reality check.  There are three of us in our little startup team.  We have all of this customer data from speaking with thirty people.  They told us about their IT problems (the space we’re in).  We talked about spam specifically (since that’s the space we’re in).  Ultimately, were they interested enough to pay for it?  Do we have a product that solves a problem when talking about spam or does it turn out that spam is a problem that’s been solved?”  Turns out that the number one problem they have is something different, like laptop theft or people playing Farmville when they’re supposed to be working.  Then you want to start thinking, how can we take all this input and solve this customers problem.  We had a whole bunch of assumptions but now we have a real data to look at.”

Look for more talks from the Startup Day archives in the coming weeks, and make sure to join us Sept. 22 for Startup Day 2012.