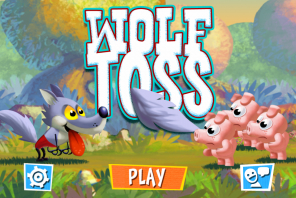 The significance of WolfToss isn’t necessarily the game itself — though Zipline Games co-founder Todd Hooper admits that he spent an inordinate amount of time over the Thanksgiving holiday slinging the Big Bad Wolf at pigs and boars.

The real significance of the title, the first for Zipline using the open source Moai platform, is that the company simultaneously launched across iOS, Android and in the Chrome Web Store. Hooper said that’s a first for a native game.

Utilizing Moai, Hooper noted that there was no expensive porting effort. WolfToss marks the first effort by Zipline’s studio to use Moai for one of its own games. (As we noted in September, Bungie’s Crimson: Steam Pirates also used Moai).

WolfToss is free to download, with the company planning to make money off the physics-based puzzle game via in-app purchases.

“We definitely took some inspiration from classic physics games like Crush the Castle and Angry Birds, plus platformer games and added a retro cartoon feel,” explains Hooper. “The game has been on test in Canada for a week and charted in the top 30 puzzle games, which is great.”

Zipline plans to continue developing WolfToss, and the company’s game designers also are working on new titles too.

In addition to developing games, Zipline gets paid by developers using Moai cloud services. Since July, Hooper said that about 3,000 developers have chosen to work with the platform.

In addition to Bungie, Jordan Weisman’s Go Go Kiddo (which we just wrote about Wednesday night) used Moai in its mobile app development.

“We’ve seen new Moai releases from Go Go Kiddo on iOS and in the Amazon App Store, and DistinctDev on iOS,” said Hooper. “Wolf Toss is the most ambitious in terms of hitting Chrome as well, but lots of cross platform releases are in the pipeline from studios large and small.”

Here’s a look at a promo for the new game.