SEOmoz is gobbling up another Portland startup, this time acquiring GetListed for about $3 million in cash and stock. The deal follows SEOmoz’s acquisition of Portland-based social media analytics upstart FollowerWonk in August.

Founded in 2009, GetListed operates a service that helps small businesses determine how their listing information is appearing on search engines such as Google and Bing, as well as directory sites like Yelp and Foursquare. About two million businesses have utilized the service since it launched, and SEOmoz plans to use the GetListed offering to expand its reach into smaller businesses.

Fishkin said that oftentimes businesses have no idea how or where that listing info appears, causing confusion for small business owners and the marketers who are trying to help them. 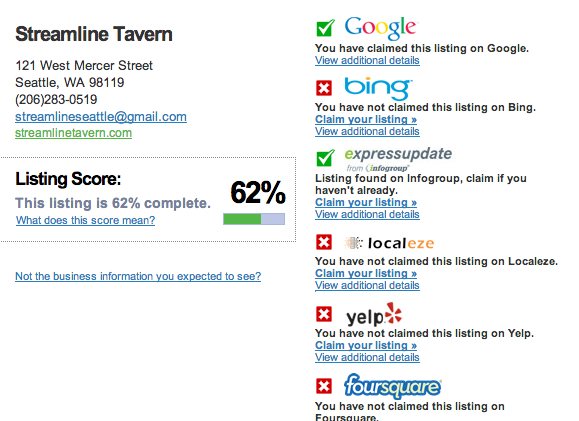 “…The ins and outs of how Google and Bing index and rank businesses in their maps/local algorithms is extremely complex, often to the point of being overwhelming,” he said. “GetListed tries to remove some of that pain today but helping businesses see where they are and aren’t listed, where data may be incorrect, and by providing a task list of common items that can help.”

As a result of the deal, GetListed’s David Mihm will join SEOmoz, and continue to be based in Portland. Co-founder Chris Tanger plans to contract with the company, working from Chicago.

The acquisitions of GetListed and FollowerWonk follow SEOmoz’s $18 million venture capital round earlier this year. At the time of the deal, Fishkin said they planned to use some of the cash for acquisitions.

In the traditional silly style of SEOmoz, the company issued this open letter to the Internet as it related to business listing information.

For too long, you’ve held local businesses hostage by misrepresenting or ignoring their existence. They don’t know how to use you. They don’t know what you want. They don’t have much money. But what they do have are two new allies:  SEOmoz and GetListed. Together, we have a very particular set of skills. Skills we’ve acquired over a decade of helping make their presence accurate, widespread, and consistent. Skills that make us a nightmare for those who seek to hinder transparency on the web. If that data is made accessible tomorrow, it will be the end of this. But if not, we will look for it. We will pursue it. We will put it all together on the web for every local business owner to use.