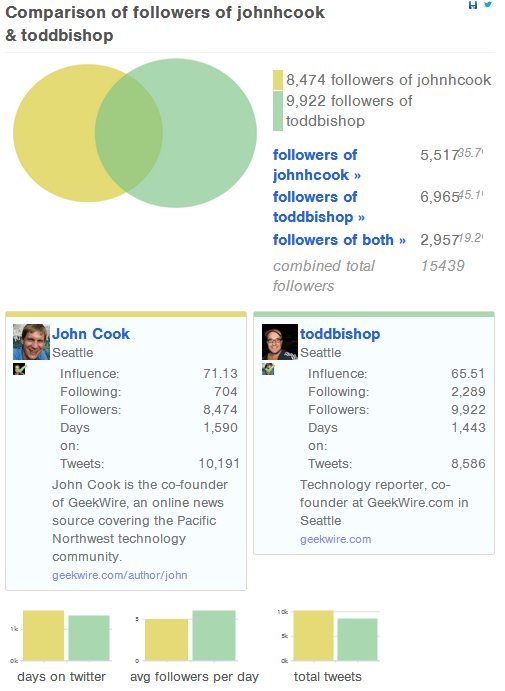 Ever want to know how your Twitter standing stacks up against friends, business rivals or celebrities?

That’s the idea behind Followerwonk, a Twitter analytics upstart that was acquired today by fast-growing SEOMoz for a purchase price in the range of $1 million to $4 million. Followerwonk allows users to visually track, sort and analyze followers, as well as compare one’s personal Twitter following to others. (As you can see in the comparison above between GeekWire’s Todd Bishop and me).

“Followerwonk is one of those awesome, young companies that just has something special,” said SEOmoz CEO and co-founder Rand Fishkin in a release. “We really dug what they were able to do from a social media standpoint and the whole crew fit in really well with the Moz culture. We’re looking forward to meshing our ideas and making something really cool.”

The company was founded in 2009 by Peter Bray in Portland, and with the acquisition SEOMoz has established an office there that it may grow over time.

The Followerwonk site is addictive for data hounds, and curious social media fiends.

In fact, this morning I hit my daily quota of free reports, at which time Followerwonk tried to upgrade me to a premium subscription. Also, the SEOMoz service has already been integrated with Followerwonk, allowing users of the service to get a free trial of SEOMoz Pro.

A number of large brands are already using Followerwonk to get insights into their Twitter patterns, including Xerox, Zulily and Rhapsody.

To some degree, Followerwonk reminds me of Compete.com for Twitter. Just as Compete generates comparisons between Web sites, users can draw comparisons between various Twitter followings. But you can’t compare or draw stats on everyone. For those with large social media presences, like Mitt Romney and Bill Gates for example, it does not generate reports.

The Followerwonk deal marks the second acquisition for SEOMoz, which in 2008 purchased Blogscape for about $20,000. In a blog post, Fishkin notes that Followerwonk is the company’s first major acquisition.

It comes just a few months after SEOMoz raised $18 million in venture capital from Foundry Group and Ignition Partners.  At the time of the financing round, Fishkin said that they may use some of the money for acquisitions. SEOMoz now employs 82 people, up from the 60 it had when it received the investment. It is on a revenue run rate this year of about $21 million.