It’s been just over a year since stealthy Mobilisafe came on to the scene with backing from Madrona Venture Group and John Stanton’s Trilogy Equity Partnership. But the Seattle startup, led by former T-Mobile software architects Giri Sreenivas and Dirk Sigurdson, is finally taking the wraps off its new mobile security service today.

And what have the engineers been working on for the past 12 months? Mobilisafe is unveiling what they describe as an “agent-less, cloud-based service that enables IT to evaluate, secure and, if necessary, block or wipe mobile devices of any kind connecting to the business network.” 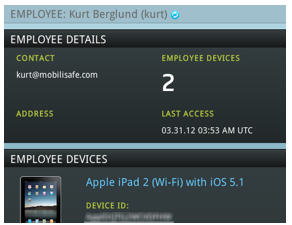 That means IT managers, who have been pulling their hair out about mobile security, don’t need to install new hardware, install agents on mobile devices or implement network changes. “Mobilisafe is the only solution that works 24-7 to keep an eye on emerging threats and responds in real time,” the company says in a video explaining the service.

Mobile device security is a big problem as more workers use their own gadgets to conduct business. In fact, a recent study by the company found that that 64 percent of iOS devices and 40 percent of Android devices are running out-of-date firmware. With Mobilisafe, the company claims that it can notify employees on how to upgrade their devices in order to prevent security threats.

Mobilisafe also says that its service is cheaper and far easier to install, noting that mobile risk assessments from firms such as Symantec can cost upwards of $40,000. Mobilisafe is offering a 30-day free trial, and a contract of $4 per month per user for those who sign up with an annual contract. (A month-to-month plan also is available for $5 per month per employee).

In addition to Madrona and Trilogy, Mobilisafe now says that is backed by T-Venture, the venture capital arm of T-Mobile.