You might start seeing a few more pink mustaches on the streets of Seattle in 2013.

Lyft, the San Francisco ride sharing service known for the pink mustaches attached to participating vehicles, is eyeing Seattle and L.A. as its next cities, TechCrunch reports.

Lyft is a bit like Uber, but without the sleek black Town Cars, the professional drivers or the higher prices. At Lyft, car owners actually sign up to provide transportation to neighbors, co-workers, friends, other acquaintances and, even, strangers.

In other words, anyone who passes a criminal background check, boasts a clean driving record and owns a vehicle made after the year 2000 can join the ride-sharing program as an eligible driver.

“Safety is our top priority. All drivers and their cars are screened and continually evaluated,” Lyft writes on its Web site. “We also created a first-of-its-kind $1M excess liability insurance policy to provide everyone peace of mind.” 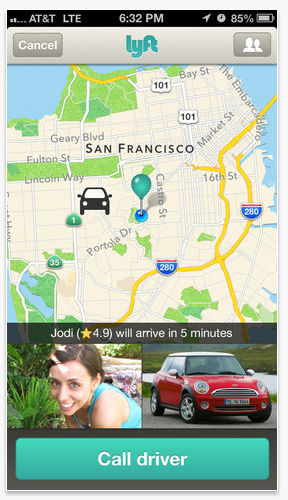 An offshoot of five-year-old ride sharing service Zimride, Lyft is currently advertising for city managers in Seattle, LA, Portland, Boston, Austin and other locations. Zimride COO John Zimmer tells TechCrunch that Seattle and LA are in the top 10 cities where it would like to expand, noting that they plan to open just one city in January.

“There are lots of similarities to San Francisco: the weather, people’s attitudes, the eco-consciousness, the early tech adopters — we love that aspect of Seattle,” SideCar CEO Sunil Paul told GeekWire. Paul described  SideCar as “more like a ride with a friend than a cab or limo driver.”

With both SideCar and Lyft, passengers use smartphones to locate and request drivers.

The new services have met with some roadblocks. The California Public Utilities Commission issued “cease and desist” letters to both SideCar and Lyft for potentially operating without the proper charter party carrier permits. Those permits are issued in order to make sure that drivers are properly insured and screened.

Meanwhile, the City of Seattle just started experimenting with a new car-sharing service called Car2Go. Similar to ZipCar, the new service allows residents to rent a SmartCar — more than 300 of which will be strategically positioned around the city — for 38 cents per minute.

“Car2go will soon be one of many ways that people can get around our city,” Seattle Mayor Mike McGinn said in a press release earlier this month. ”We welcome this new, innovative transportation choice for Seattle residents and visitors.”

And Car2Go isn’t the only new way to get around the city.

Uber, which is backed by Amazon.com founder Jeff Bezos, started connecting passengers to drivers in Seattle in the summer of 2011.

Given all of the developments, this much is certain: Seattleites will certainly have plenty of new options for transportation in the new year.