At 6:45 p.m. last night, I logged into the Uber iPhone app and requested a private driver. Within 10 minutes, a black Town Car was sitting at my door step with a polite driver by the name Aklilu Teka ready to whisk me away to a reception at Canlis. It was part of a promotion by Uber, which is launching service in Seattle today.

You may have already heard of Uber, the fast-growing San Francisco startup that allows users to request a private driver from an Android or iPhone app and then track the driver’s progress on the phone. But I wanted to get an inside perspective on the company, so I spent my 10 minute ride interviewing Teka.

Here’s the bottom line: Teka — who hails from Ethiopia and has been driving cabs and private cars for more than 15 years — loves Uber.

And that’s very good news to Uber CEO Travis Kalanick, who told me last night that he can predict the success of a new market based on whether the drivers are happy. From what he’s seen so far, Seattle is poised to do very well.

Uber is contracting with about 40 private drivers in the Seattle area, with about two dozen on the road last night for the launch party. (A map at the party showed where drivers were in real time as guests arrived).

Teka, who happened to be circulating in the Ballard area when he got my request, arrived at my home about 10 minutes later. The veteran driver, who has been working with Uber for the past two weeks during the company’s trial period here, said he’s been impressed with the operation so far. 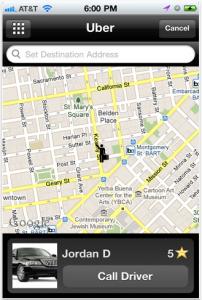 “I am definitely liking this because of this new technology with the GPS system, especially because there is no cash transaction between drivers and the client,” said Teka. “So, the client, they like it. They love it. No hassle. Just pick up the client and drop them off. I like it so far.”

Uber collects an individual’s credit card information before they ever step in the Town Car, and calculates the price of the ride based on the distance and time spent. The tip is always included. In Seattle, Uber charges a $7 base and $3.75 per mile or a 75 cent per minute time fee based on how fast the car is moving. A special rate between downtown Seattle and Sea-Tac airport is set at $50.

Teka, for one, likes the idea of tracking clients’ whereabouts on the iPhone. If a request comes in and he’s the closest driver, he gets first shot at the fare.

“This technology, the iPhone, it is amazing. I love it,” said Teka, who had not used an iPhone prior to joining Uber.  By the time Teka had picked me up, he had already completed about half a dozen rides.

Not everyone’s ride went as smoothly as mine. One of the guests at the party told me that his driver got lost on the way, which is understandable given the extremely tricky location of Canlis. Teka also told me that the Uber app doesn’t always provide the exact location of the client, making it a bit challenging at times to find a residence or business.

Uber also will have to overcome a Seattle cultural issue. After all, this isn’t New York and San Francisco (the other two markets where the company operates) and I am curious how the service will resonate in laid-back Seattle.

Teka, for one, is hoping that it resonates.

And Teka — who expects to get as much as 80 percent of his fares through Uber — thinks it will catch on. Asked whether he’ll be able to make money through Uber, he immediately says: “Oh, yeah.”

“I can see the future for Uber, and it looks like they are going to go all the way worldwide because of this technology,” he said.