Is this a glimpse of the future of Kinect for Xbox 360 and Windows?

During a Microsoft Research demo event with a handful of reporters earlier this year, there was one project that the company asked us not to video or photograph. It used the company’s Kinect sensor to quickly create a highly detailed 3D model of a room, including the objects and people inside it. 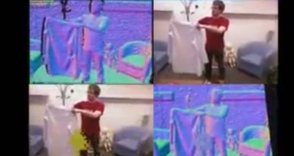 Now, Microsoft has lifted the veil of secrecy around the project, at least enough to demonstrate it publicly. The project, now dubbed “Kinect Fusion,” was shown this week at the SIGGRAPH computer graphics conference in Vancouver, B.C., and you can see it in the video above.

As noted by Microsoft’s Steve Clayton, one of the most interesting moments comes at the 3:50 mark, when the researchers show how virtual objects — in this case, exploding paint balls — can be added to the scene.

The virtual writing toward the end is also pretty incredible.

Microsoft isn’t saying what it plans to do with this, but it’s easy to imagine the approach being applied to future Kinect games and applications.

Engadget has more details from the Microsoft presentation at the conference earlier this week. The site explains that it “could be used to spark the next generation of gaming interaction and augmented reality, taking a user’s surroundings and making it a live part of the experience.”