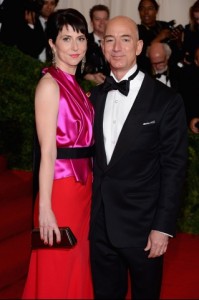 Here’s something we’ve never seen before. From khakis and door desks to a tuxedo on the red carpet, the transformation of Jeff Bezos from geek to fashionista is complete, apparently.

In a week when Facebook’s Mark Zuckerberg was criticized for wearing a hoodie on Wall Street, the Amazon founder was on the other end of the spectrum as the co-chair of the Metropolitan Museum of Art’s annual Costume Institute Gala — looking sharp in a tux as he and his wife arrived for the festivities.

The role was part of Amazon’s estimated $1 million sponsorship of the Met Gala — part of the online retailer’s new push into high-end fashion, competing against another Seattle company, Nordstrom. (It’s a sponsorship that may raise eyebrows in Amazon’s hometown, where the company has been in the spotlight for its meager community involvement.)

The jury is still out on whether Amazon can find a place for itself in the fashion world. In a story on Amazon’s push into fashion, the New York Times poked fun at the Amazon founder for hanging his Amazon badge from the pocket of his Prada jeans. Presumably he left the ID at home for the Met Gala, but you never know what was under that tuxedo jacket.

Bezos’ wife, MacKenzie, did make it into Vogue’s best-dressed gallery in a Juan Carlos Obando dress and Tiffany & Co. clutch.

Not faring as well, Bezos himself lost control of his tie and appeared to lose interest in the proceedings, or at least in his table-mates, as the night went on.

Bezos conceded to Bloomberg’s Virginia Postrel, “Before we got involved, this event wasn’t on my radar at all.”