I’m not the only one spending some of my holiday shopping time picking up the new iPhone. A study out today indicates that Apple has achieved its highest ever share of smartphone sales in the U.S., accounting for 53.3 percent of sales in the past 12 weeks.  That compares to 35.8 percent of sales or the same period last year.

Apple is pressing on the gas with the iPhone 5, with a number of retailers, including Walmart and Fry’s Electronics, rolling out discounts for the 16GB for as little as $126. Some have suggested that the price cuts actually may mean that the demand is not as great as Apple had thought for its latest device.

Pacific Crest’s Andy Hargreaves wrote in a note to clients this week that global demand is not as great as they thought for Apple’s marquee product. “Although we believe iPhone 5 remains the best-selling high-end smartphone on the market and is likely gaining significant share right now, a combination of market saturation, weak global demand and incremental innovation that has surpassed consumer demand are likely negatively impacting iPhone sell-through,” he wrote.

However, Dominic Sunnebo, global consumer insight director at Kantar Worldpanel ComTech, which conducted the most recent study, noted that Apple’s smartphone sales have been strong in the U.S. as evidenced by the fact that its share topped 50 percent for the first time. He expects further gains in December, buoyed in part by the strength of the new iPhone 5.

Windows Phone has not been able to make much of a dent in the U.S., inching up just 0.6 percent to a 2.7 percent share of new sales. That’s better than RIM, the BlackBerry maker, which saw its share drop 5.6 percent during the period.

The Kantar numbers measure sales of new smartphones during a 12-week period. And while Apple is out in front in that race, it’s still behind Android when it comes to total market share. According to numbers released by Nielsen, 52 percent of Americans own an Android device, while 35 percent own an iPhone. Windows Phone accounts for two percent of the total market.

Here’s a look at more of the data from the Kantar report: 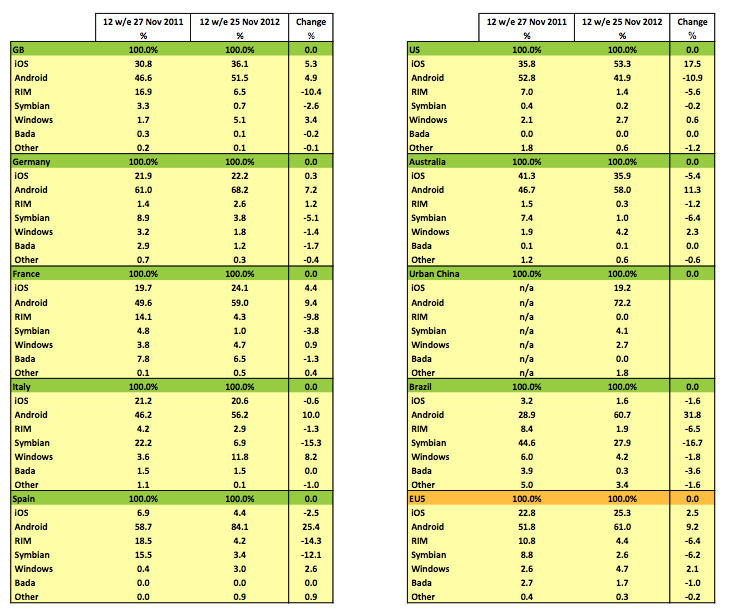