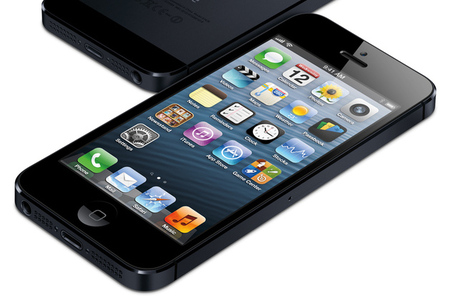 What better way to spend a cold rainy Saturday in Seattle than shopping for a new iPhone 5?

Actually, I can think of a number of better things to do with my time than brave the malls during the holiday shopping season.

You see, I’ve got an aversion to shopping malls, and shopping in general. Simply put: I hate it.

But it was time for our family to upgrade. My wife’s iPhone 3GS, an old hand-me-down, was on its last legs. With a cracked screen and unable to accept incoming phone calls, it was time for an upgrade.

This shopping trip actually started in my driveway … on the phone. Curious about Wal-Mart’s $127 promotion for the 16GB iPhone 5, I called two area Wal-Marts. (Yes, my wife gave me the lecture about how Wal-Mart plays a role in killing both small and big businesses, an especially touchy subject for our family since we both hail from Wooster, Ohio — the former hometown of Rubbermaid. See: Is Wal-Mart Good for America?).

I didn’t think the Wal-Mart promotion would extend to the heavier duty models, the 32GB or 64Gb iPhones that I wanted. But, I nonetheless, thought I’d do a little price comparison before hitting the road.

So, with the family in the car waiting for this festive holiday shopping trip to begin, I called the Wal-Mart in Bellevue’s Factoria neighborhood. The customer service representative was helpful, asking which carrier I wanted. I told him AT&T (more on that below) and he promptly notified me that they were sold out. Furthermore, he mentioned the most dreaded words in shopping: long lines.

With that info in hand, I then called the Wal-Mart in Lynnwood. After about five minutes of waiting to get connected to the mobile department, I hung up. Wal-Mart was off the table for me — thus eliminating a potentially thorny ethical dilemma.

So, with the family cruiser packed, we set out on our drive to Northgate Mall where I’d have three options to peruse iPhone 5s (Best Buy, Target and the AT&T store). Knowing that this voyage would likely not end well, my wife bluntly asked: “Do you really want to do this?”

Yes, I did. We didn’t have anything else planned, and I thought I had done a good job of mentally preparing myself for the day.

With laser focus, I found the mobile kiosk. Amazingly, the line was short. However, they did not have my first choice— the 64GB device — in stock. Since I use my phone as a reporting device for photos, videos and audio interviews, storage capacity is a big deal. In fact, I had started to run out of capacity on my 32GB iPhone 4, and with the more powerful camera on the iPhone 5, I thought I’d be in better shape with the Ferrari of iPhones.

I decided to move on, knowing I could come back to Best Buy for the 32GB if all else failed. Total shopping time: 5 minutes.

Luckily, Target is just a short elevator ride away from Best Buy. So, with my son in my arms and my wife tagging along, we headed to the upper floors.

I had only recently learned that Target carried the iPhone when a colleague arrived with one in the office, telling me of his own rather painful shopping experience at the downtown Seattle location.

Amazingly, there was also a short line in the mobile department, and I quickly set out to find if the 64GB device was available. The manager took a look in the back store room, and emerged with a black 64GB iPhone 5.

It was the last one in stock. The white iPhone 5 was already sold out, which wasn’t a big deal to me.

So, why did we limit our carrier choice?

Our family actually could have switched, but I decided to re-up with AT&T. Now, I know what a lot of you are thinking out there.

But, one of the things I love about the iPhone is the ability to toggle between voice calls and apps simultaneously, checking the calculator or email while continuing a phone conversation. (Yes, I do still use my phone occasionally for voice communication).

That functionality, from what I’ve read, is not available on Sprint or Verizon’s LTE Network. Given that, along with the fact that AT&T’s network has gotten better in my experience, I decided to stick with them for another two years. (In fact, I actually used the simultaneous phone call and mobile  browsing capability when on hold with Wal-Mart, multi-tasking away by researching terms like “iPhone 5 deals Seattle.”)

I opted to skip the program, though the Apple Care program has proved useful with my MacBook Pro since it took care of a one-time power cord issue. Guess I’ll just hope my son doesn’t toss the new phone in the toilet. (What do you think? Should I have added Apple Care+?)

Without Apple Care+, my total bill came to $382.14, with taxes. (Excluding the puzzle and memory card game that my wife picked up in the toy department of Target. It also excluded a $40 iPhone 5 case that I ended up buying at Best Buy).

That wasn’t too bad, and I made it through the mall with only a few bouts of surliness. (My wife will likely disagree with that statement).

My initial impressions of the iPhone 5 are positive. I did struggle a bit with setting up my two Gmail accounts, encountering some issues because of the Google 2-step verification system that I had created. I’ve also hit some roadblocks with getting the most recent versions of my apps downloaded on the new phone, but that’s a relatively minor deal.(Why do I have to resign in to Pandora?)

The iPhone 5 isn’t revolutionary by any means, but it is lightning fast. And the camera, something I use often, is far superior from the old iPhone 4 that I was using (and has now fallen into the hands of my wife).

In many ways, even though I’ve moved to the iPhone 5, I think her upgrade to my old phone is the bigger deal in our family.

The only thing: Her phone now works, which means she no longer has an excuse for not answering my calls.