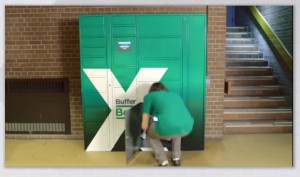 The combination of the bricks and clicks world is getting a bit more interesting. Google today announced that it is buying Waterloo, Ontario-based BufferBox, a 21-month-old Canadian company that allows parcels to be shipped to pick-up stations.

The move is interesting because Amazon.com has been rolling out a competitive locker service in various markets, first testing the concept at 7-Eleven stores in the Seattle area. In recent weeks, we’ve reported on the Amazon Lockers getting rolled out at both Staples and RadioShack locations.

Terms of the deal weren’t disclosed, but TechCrunch pegs it at more than $17 million. BufferBox plans to operate more than 100 locations in Canada by the end of next year, but with Google resources it could add on to that number. It plans to put the boxes at transit stations, and is working with grocery stores and other retailers on additional locations. The acquisition also highlights how Google and Amazon appear to be on a collision course.

“We have been able to achieve more than we could have ever imagined since we started working on our idea a couple years ago, and the team couldn’t be more excited about the future,” the company wrote in a blog post. “As online shopping becomes a bigger part of how you buy products, we look forward to playing a part in bringing that experience to the next level. We are happy to share that it will be business as usual for our users and we are looking forward to continuing to build out the service.”