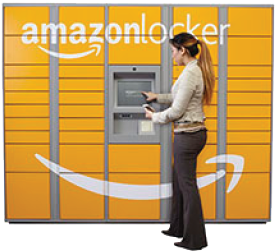 Although the Seattle-based e-commerce giant competes with Staples and Radio Shack on many levels, the retailers’ decision to install the Amazon Lockers is motivated in part by a desire to increase foot traffic in their own stores, as Amazon customers show up to retrieve the packages that they’ve sent to the locations.

As we noted in our post last night, we first started covering the Amazon Lockers when they started popping up at 7-Eleven stores in the Seattle area last year. Amazon has been steadily increasing the footprint of the lockers to more cities, giving its customers additional options for delivery if they can’t receive a package at home or the office.

Amazon customers can search for nearby Amazon Lockers when checking out online, and Amazon sends an email notice when the package is ready for pickup, allowing them to enter a code at the location to open the corresponding locker with their package inside.

We’ve contacted RadioShack for more details on the Amazon Lockers rollout, and we’ll update this post if we hear back.

Update: Looks like grocery chain Albertsons is on board, as well. A search for Amazon Lockers in Southern California shows a new location at an Albertsons in Marina Del Rey, Calif.