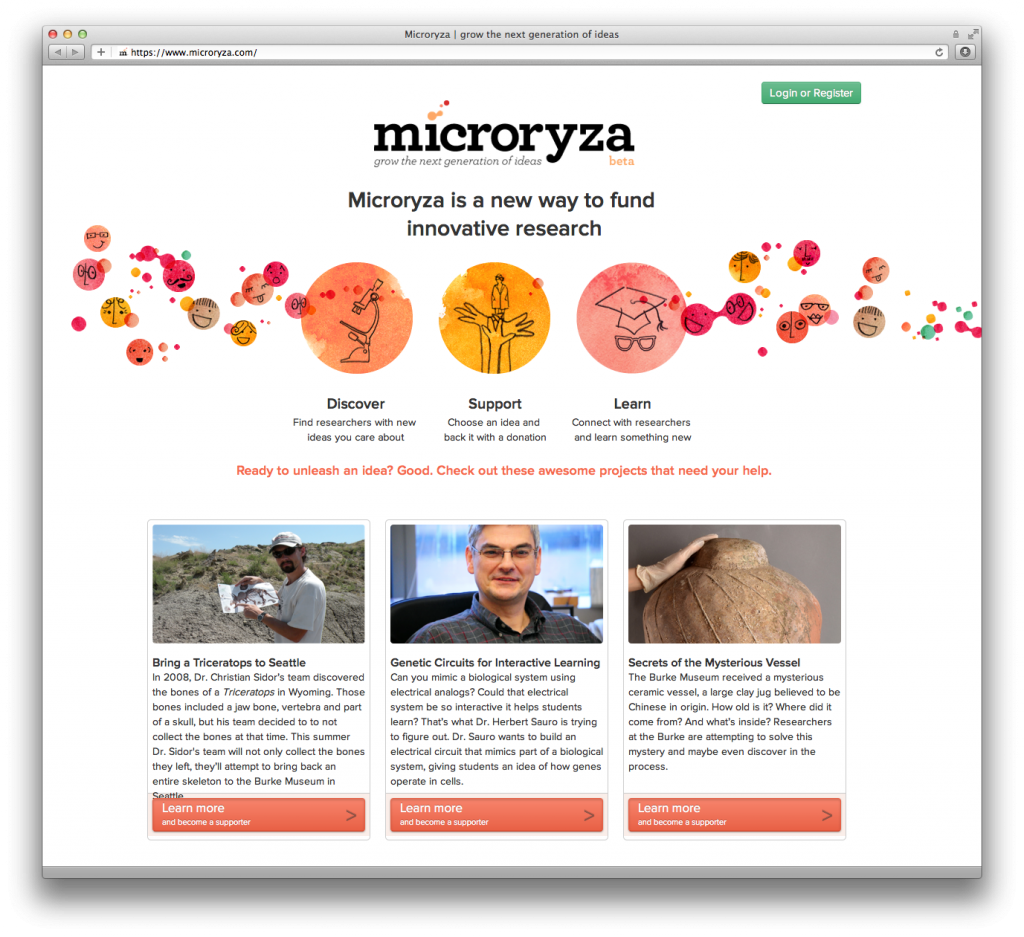 Want to help scientists figure out why chili peppers are spicy? How about the origins of a mysterious clay jug? Or, for that matter, whether computer algorithms can be used to determine if jokes will be funny?

If those sorts of ideas get your juices flowing, then head on over to Microryza (More on that crazy name later). The Seattle startup today launched a “crowdfunding” site where donors can get connected with scientists and researchers seeking funding for their projects.

Think of it like Kickstarter — just for hardcore science geeks.

Microryza was started by Denny Luan and Cindy Wu, former University of Washington researchers who had grown frustrated with the bureaucratic and costly way in which many research efforts were funded in the U.S.

“Most researchers want to reach out to the general public for funding and support — but don’t know how or don’t have the right tools,” said Robert Farrington, who joined with Luan and Wu in co-founding the startup. “In science, the average researcher spends 12 weeks a year writing grant proposals, most of which are rejected.” Given that, Luan, Wu and Farrington decided to bring the power of the crowd into the lab.

They do face some competition, namely in PetriDish.org.

Ecologist Joshua Tewksbury is currently using Microryza to try to raise $6,900, money that he’d use to travel to Bolivia to study rare chili pepper species which he says could provide an “engaging window into evolutionary principles that shape our world.”

“To understand why chilies are hot, we need to work in the center of chili diversity, Bolivia. Our first goal is to map the evolution of pungency in this genus using molecular genetics, and to map the conditions under which chemical protection evolved. We have already discovered 4 different chili species that are sometimes pungent (hot) and sometimes not,” writes Tewksbury in his pitch. The researcher still has a long way to go, with just $195 contributed at this point.

So, where does Microryza’s weird name come from?

It’s actually the combination of two words “microfinance” and “mychorizzae.”

The first word is pretty obvious, but the second, mychroizzae, might not be familiar to the non biologists in the audience.

Mychroizzae are described as symbiotic, microscopic fungi that live in the roots of plants and break down nutrients, fight off pathogens, and stabilize the soil.

“Although they’re small and unnoticeable, when you have lots of them they support an entire ecosystem of roots, shrubs, and trees,” notes Farrington. “Without mychorizzae many of the plants on our planet would never survive. In the same way, we’re growing a community of individuals who provide microgrants to seed fund new research. With Microryza, people from all over the world can all come together and grow new ideas.”

Here’s a Microryza page for the clay pot archeology project from the UW’s Burke Museum.