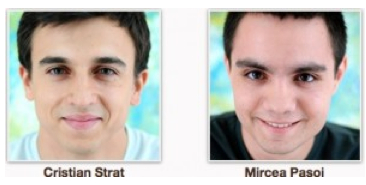 Mircea Paşoi and Cristian Strat, the two Romanian Web developers who founded Summify instead of taking jobs at Facebook and Google, have now decided they’d prefer to work at Twitter.

The developers announced today in a blog post that they have sold the company to the social networking powerhouse, a move that comes just 10 months after Summify launched. Terms were not disclosed.

The Vancouver, B.C.-based company — which created an email newsletter product which generated news headlines from those in one’s social network — had raised cash from RealNetworks founder Rob Glaser; Flickr co-founder Stewart Butterfield; Accel Partners and others.

Summify is a cool service, and I use it every day to get a summary of the news. That’s why I was bummed to hear that Twitter plans to disable the service. From the FAQ:

“We will be disabling new account registrations immediately and we will also be removing some features. We will keep the email summaries for a few more weeks, but at some point we will shut down the current Summify product. In the meantime, if you’re a user of Summify you’ll still receive your summaries, just like before.”

Paşoi and Cristian, who previously worked as interns at Microsoft, plan to relocate from Vancouver to the Twitter office in San Francisco. 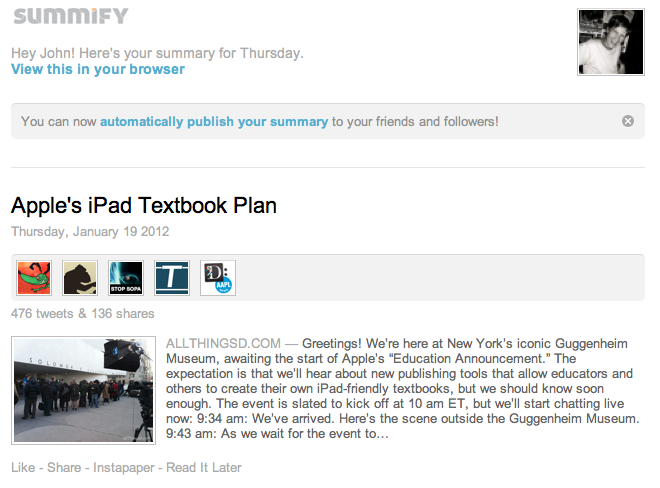 At the time of the company’s launch last Spring, Glaser noted that Summify was helping to solve the problem of information overload.

“Filtering out the noise and finding the signal is a huge problem that nobody else has been able to effectively addressed,” said Glaser at the time. “Based on using Summify and working with Mircea and Cristian for the past 3 months, I think they’ve created a breakthrough product.”

Unfortunately, it now looks like that product is going into the dustbin of tech history.

Instead, the developers are going to take their talents to Twitter.

“Our long-term vision at Summify has always been to connect people with the most relevant news for them, in the most time efficient manner,” they write today. “As hundreds of millions of people worldwide are signing up and consuming Twitter, we realized it’s the best platform to execute our vision at a truly global scale. Since Twitter shared this vision with us, joining the company made perfect sense.”