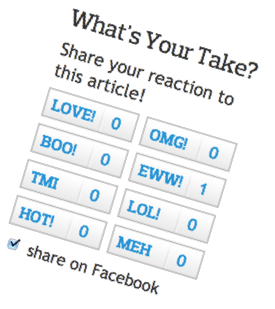 Facebook’s “Like” button has become an integral part of online life, connecting sites around the web back to the social network, helping people send quick signals to their friends — and filling up Facebook’s databases with valuable information about the activities and preference of its users, whether or not those users happen to be aware of that fact.

But the “Like” button is pretty simplistic. It’s a binary measurement of a multifaceted world. Facebook knows this, and it has been working with third-party services and applications to add new verbs to the mix as part of an expansion of its “Open Graph” initiative.

It started a while back, most noticeably through the integration of apps such as music service Spotify into Facebook — showing Facebook users what their friends are listening to at any given moment, for example. Other examples include the ability for Facebook users to indicate that they’re watching a particular show or cooking a particular dish.

Now, a new wave of Facebook apps is taking it to a whole new level.

Case in point: Wetpaint Entertainment, a television fan site that is integrating with the Facebook Timeline to let people click to say LOVE!, BOO!, TMI, HOT!, OMG, EWW!, LOL!, or MEH, in the same way that they’ve said “Like” in the past. The site, operated by Seattle-based startup Wetpaint, rolled out the new buttons today.

When someone clicks on one of the new buttons, it shows up in their Facebook Timeline, visible to their friends, just as with the Like button. I’ve been testing the buttons out this morning, which explains why my Facebook friends have seen me “OMG!” Shannon Magrane’s audition on American Idol, among other things. (Seriously, I can’t believe Steven Tyler said that to her dad.)

Here’s my question: Is this too much? I can understand moving beyond the “Like” button, but it seems from the outside that Facebook has essentially given free rein to third-party developers to come up with any verb that they want. It feels like the pure power of the “Like” is at risk of being diluted.

Then again, maybe I’m too much of a Facebook traditionalist.

Until we get on board with the new buttons, you’ll have to let us know whether you LOVE, BOO, or MEH this new trend manually, in the comments below.