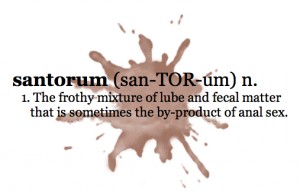 Seattle sex columnist Dan Savage’s cruel, yet brilliant Web joke on Republican presidential candidate Rick Santorum appears to have run its course after nearly nine years. As you may recall, Savage used his influence (and smart SEO tactics) to create a new definition of the word “santorum” to protest the politician’s views about homosexuality.

That definition and accompanying Web site rose to the top of rankings on Google, so any time someone conducted a search on the politician’s name they were reminded of Santorum’s stance.

Now, Savage writes that “Spreading Santorum” is no longer the top result. Conspiracy? Or did Santorum’s pleas to Google to change the embarrassing reference finally pay off?

“They can remove Spreading Santorum from the search results—or it can fade away, thanks to algoribbon tweaks—and they can remove Urban Dictionary‘s definition too. But the damage is already done. No one has to Google “santorum” when they see a headline like “Santorum comes from behind in Alabama three-way.” Everyone gets the joke without anyone having to look it up. The new definition is out there. Mission accomplished.”

SearchEngineLand’s Danny Sullivan takes a deep dive on what happened with the Santorum search results, showing multiple before-and-after screen shots. Sullivan reports that the changes in search results occurred after Google tweaked its algorithm. They were not manually adjusted due to pressure from Santorum, the company said.

Sullivan has more details on how Savage pulled off perhaps one of the most successful SEO campaigns of all time in this post: Should Rick Santorum’s “Google Problem” Be Fixed?

Here are the top results that Google now returns when searching for the word “santorum.” 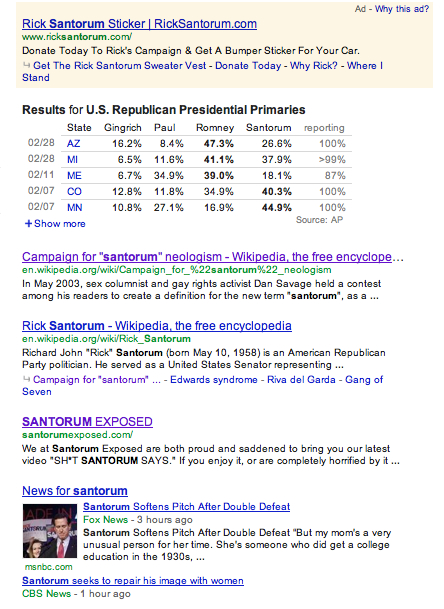