Bravo film crews have been hanging out at Cheezburger’s offices in lower Queen Anne, getting footage for the release of their new reality TV show.

Cheezburger CEO Ben Huh has been keeping his lips sealed when it comes to anything having to do with the new show. But Bravo just released some previews, and announced that it will debut on Wednesday, November 7 at 11 p.m.

Here’s how Bravo is describing the show, dubbed LOLwork:

The 30-minute doc-com goes inside the world of Ben Huh and his eccentric staff as they attempt to make the world laugh five minutes a day by putting nimble yet grammatically incorrect captions on cute photos of domesticated pets and animals.

From the previews below, the show appears to be written, edited and performed very much in the style of The Office, the NBC hit show that’s entering its final season this fall. (Heck, the intro music even reminded me of the The Office). 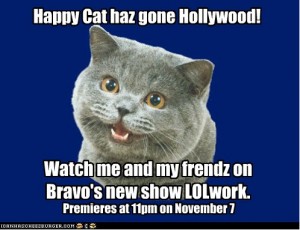 This isn’t reality TV as much as  — at least as how Bravo describes it — a “doc-com.”

Take for instance Emily Huh’s remark, delivered with a dramatic pause, followed by a quick cut back to more dialogue from other staffers:

“My name is Emily. I take care of the content group, and make sure everything on the site is funny. I’m also married to the boss.”

So how close is this to reality? Cheezburger isn’t talking about the show, but to the casual viewer, the previews feel heavily scripted, and there are several Cheezburger “employees” in the show who seem to have come straight out of central casting.

Now, what’s interesting here is that The Office’s Dunder Mifflin is a fictional paper business. Cheezburger, on the other hand, is a real business, generating real revenues with real people working there.

This could be a very interesting experiment.

Here’s a sneak peak of the show in which the staff debate whether they should post a photo of a dead cat. And if that doesn’t get you hooked, Bravo also announced that Silicon Valley Startups, the reality show featuring Randi Zuckerberg, the sister of Facebook co-founder Mark Zuckerberg, will debut Monday, November 5th at 10 p.m.

And here’s some more strange body tricks from the Cheezburger office.