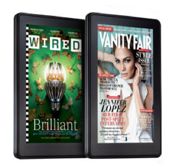 Amazon.com senior vice president of worldwide digital media Steven Kessel — who helped lead the early efforts behind the Kindle electronic reading device — is taking time off from the company, according to a report by Tricia Duryee at All Things D. Kessel joined the company in 1999 and assumed the senior vice president role in 2006, overseeing the company’s digital strategy around books, music, video and the Kindle.

Those are becoming increasingly important business units as Amazon faces tough competition from Apple and others. During the absence, Kindle device boss Dave Limp and Kindle content chief Russ Grandinetti will oversee the entire unit, according to All Things D.

“Jeff (Bezos) once said he couldn’t imagine anything more important than reinventing the book. I think that sums it up really well, if you think about that across all our media products,” Kessel said in 20008.

The upper echelons of Amazon’s management team are not widely known, for the most part cutting a low-profile and staying out of the limelight.